Τhe GTV model is similar to the GTS one. However minor differences produce a different outcome and sensation.

Close to the top speed some wobble may be felt, however that will be no problem worrying the rider. On hot summer city rides the radiator fan may be heard.

Riding position: The seat height is slightly greater than average. Combined with the relatively increased width of the seat, riders higher than average will step firm feet both on the ground. The neutral riding position places the rider in and mainly over the vespa.
The dimensions are average for the category standards, the width is generally speaking narrow. However the handle bar is wide, it is larger than that of the GTS model.

The GTV provides a rather heavy feeling, centre of gravity feels at the middle of the scooter. The two seats are fixed on a common base, thus they are lifted together. Τhe double seat arrangement results to a more forward riding position than that of the GTS model.

On the road: The front suspension which is a single arm is soft. The two shocks rear suspension, is relatively soft. The dimension of the wheels is 120-70-12 at the front and 130-70-12 at the rear. The wheelbase is relatively short, improving agility even more.
Steering lock on town rides is exceptional, providing really tight turning radius. However filtering will require some caution due to the wide handle bar, which is often at the same height with the car mirrors. Town rides are really easy. Changing direction is considered to be rapid, agility is top class. Despite the 12 inch wheels, town rides are very comfortable.

On bumpy roads the wheels provide feedback to the rider however this is filtered adequately by suspension. Consequently there are no miracles taking place, the result is satisfying though. The scooter is comfortable on soil roads as well. Additionally comfort is great for the pillion.
At the fast pace some minor flexibility will be noticed. On low friction roads at the fast pace, feedback to the rider is diminished. Confidence will be lost. Rider will slow down.

The GTV is equipped with disc brakes and steel brake lines, front and rear. The front brake is relatively weak, on high friction tarmac it will just manage to lock the front wheel on slow speed. On average tarmac some effort will be required to lock the front wheel. Only really emergency braking on low friction roads will require some caution from the rider.
The rear brake is really good and powerful. On high friction tarmac roads the rear wheel will require serious effort to be locked, on low friction roads the wheel will be locked relatively easilly.

Comments: The pillion handgrip is very useful for positioning the scooter on the centre stand. This procedure becomes really easy then.
A unique combination of luxury, classic and modern design. A low consumption scooter, featuring an all possible indications display, a rather long space under the riders seat for a little more than a Piaggio jet helmet. Α weatherproof cover for the leather seat is included as well, together with a hook for shopping bags and a gloves compartment at the front. The rider's foot floor is not level.

The production of the GTV started after the GT 60 sales. The firm was supposed to produce 1000 anniversary model scooters. A large leather case, including a leather driving license case, a key holder, a book about the history of Piaggio-Vespa, a limited serial number 0-1000 and a weather cover for the scooter. The GT 60 model was sold out and the production of the GTV was planned, without the extras. Still the price is quite high, some 1000€ more expensive than the GTS 250 ie, which is similar in riding.

- Feedback at the fast pace on low friction roads. - Price 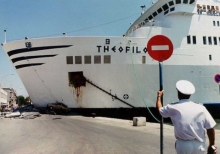