Engine: The four stroke air cooled two valve engine of 101 c.c. which is fed via a carburetor, delivers 8 bhp at 8000 rpm and 7.5 Nm of torque at 6500 rpm. Its adequate for the weight and the character of the scooter that has to be propelled.
Transmission favors acceleration than top speed. Thus accelerating, the speed of 20 Km/h is reached instantly, 40 Km/h fast, 60 Km/h adequately. Acceleration is average above the figure of 60 Km/h, 80 Km/h require quite some time.
Top indicated speed will be less than 95 Km/h, which depends on the riding conditions, rider’s body type, if he is sited upright , etc. On slight uphill roads, adverse wind, top speed may be decreased to 75 Km/h. Overtaking above 60 Km/h will require some consideration as the scooter could be stuck to the side of the car –to- be- overtaken for some time.

High marks in maths and physics are needed for safe overtaking above 60 Km/h. A lot of calculations that have to be solved correctly will be performed by the rider.


Tank range is limited due to the small reservoir. It depends mainly on the pace of the ride. The fuel indication varies on succession of uphill and downhill roads. As large scale travelling on a Mio is rather doubtful, tank range is not a disadvantage.

Riding position: The dimensions of the Mio are minimal, shorter than many 50 c.c. scooters. Apparently the length and height of the Mio are as small as possible. The width approaches the lower category limits. The seat height is low, the front part of the seat is narrow, which gets wider to the rear. Consequently, even the shortest riders will achieve to get a firm foot on the ground.
The length of the seat isn’t great, two adult men will eventually be sited. The weight of the scooter is greatly decreased (87.5 Κg dry nominal value), center of gravity feels …just above the tarmac. Mio is as light and user friendly as it can be. The low height of the scooter as well as the absence of a screen , provide an initial feeling to the rider of a large toy. However the riding position is upright, neutral, comfortable and somewhat relaxed.
Really tall riders will be fine on a straight line, on slow tight bends their knees will be touching the handle bar. This is something that rider will easily overcome.

On the road: The front suspension stiffness is average, the rear is relatively soft. The dimension of the wheels is small, 90-90-10 front and rear, the wheelbase is short. Steering lock is really good, not huge as one could expect because of the minimal wheels and wheelbase. Turning radius is tight enough, no problem maneuvering the scooter.
As a result of the above, on town rides agility is superb. Due to the small physical dimensions the scooter will no be stuck in traffic congestion. Its as easy as it can ever get, to ride the Mio. Filtering is really easy, although sometimes the handlebar height is the same with that of car mirrors.
Due to the small wheels even the tiniest road imperfection will be felt by the rider. This may be an advantage on high friction level tarmac road, where Mio excels. Its tedious though on roads featuring many imperfections. As a matter of fact, drain lids are noticed.

On low friction B roads, the superb agility is evident. Rider feels like being on top of a massive particle, that produces rapid response at the rider’s will. Its so easy to ride the Mio that its like being on a large toy, once more. Confidence to the rider is great at an ordinary pace. Road imperfections are being felt of course. Due to the reduced inertia, on slow bends, rider may be sited upright, leaning the light Mio underneath him, something like motocross riding. Superb agility doesn’t necessarily mean edginess. However on a straight line higher speed riding, rider will not feel relaxed enough to attempt one hand riding.

Mio is user friendly at the fast pace as well. It will be close to riding limits that some edginess will be felt. At a pace like this, feedback to the rider when leaning at the bends is gradually reduced. Finally the rear wheel will just start to slide under throttle, the front wheel feels better planted. Feedback is really reduced then, thus rider will slow down.
On high friction level B roads, riding quality is great. Agility at its best. Rider may pinpoint any mark on the road and just step on that. Confidence is great also. Mio is assuring and fun creating.
When the pace gets faster, rider may start to attempt leaning his body more to the inner side of the bend. Again some edginess will start to be felt. On left hand cornering the stand will touch to the tarmac. Feedback is decreased and the Mio’s light feeling will set the limits. Rider will not feel confident to attempt one hand riding on a straight line.

On roads featuring many imperfections, rider will feel every one of them. On dirt roads comfort is just tolerable, except from the absolutely flat soil roads.
The front disc brake and rear drum brake are superb for the category standards. They are powerful, providing feedback to the rider and being user friendly at the same time. If it is necessary by the rider, each of the wheels may be locked at low – moderate speed, on high friction roads. In this case, the wheels will slide on a straight line. On a street like this, the rear brake could be marginally more powerful, although this could deteriorate braking on low friction roads. When applying pressure at the front and rear brake simultaneously, stopping distance is really short.

Comments: On the price tag the following are included: an auxiliary foot starter, additional seat lock, inner anti theft kill switch , side stand, pillion pegs that fold into the scooter body, an opening switch for the seat, anti theft lock switch that remotely controls the fuel tap, a handle for shopping bags, anatomical grips for the rider. These together with the superb quality build and reliability, indicate respect to the customer.
Under the seat there is storage space which is slightly larger than an open helmet, a full face helmet will not be accommodated. The rider’s foot floor is flat which helps carrying larger objects.
The two colour paint as well as the curves at the design of the Mio, make a hint for a 50’s look. Design could be rather aiming to the feminine target group.
The colour of the display may be adjusted among green, red and blue, whenever that is desired by the rider. 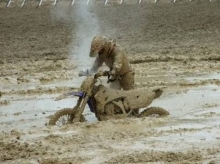