The oomph provided is felt from 5000 rpm upwards, power delivery is linear from that figure upwards. Rider has to push the engine to get decent acceleration, specifically the area between 8 to 12000 rpm is the optimum range at the fast pace of riding. At about the 13000 rpm mark the power seems decreasing. The issue of the weak low-middle power range  was resolved at the 2007 Yamaha FZ6 S2 although the engine of the FZ6 derived from the R6. An indicative average fuel consumption figure is 7 l/100 km (40 mpg) which is increased compared to the latest standards at this engine displacement.

Riding position: The saddle is relatively low, it will be convenient to average stature riders. The riding position is slightly inclined to the front, combining touring characteristics with usability. The handlebar is comparatively high. The pillion is seated quite higher than the rider, the dimensions of the saddle at the rear are moderate. The pillion’s seat is soft, the knees form a steep angle, the rack of the top case  provides a decent handle.

Seated on the Fazer, the rider gets an old school view from the bike, that is a long, narrow motorcycle, while the height of the bike is normal. The weight of the Fazer S feels heavy for this engine displacement, 189 kg (416.7 lbs) dry or 205 kg (452 lbs) wet, nominal figures.

On the road: The suspensions feel soft for a road bike. The tires mounted on the bike were Metzeler Roadtec Z6 with dimensions 110/70-17 at the front and 160/60-17 at the rear. Although they are discontinued they were a good choice for the FZS Fazer.

In town the  FZS Fazer  combines several characteristics which will satisfy the rider asking only a minor compromise concerning the weight of the bike. On daily rides she is a balanced and neutral bike asking a little more throttle opening at the low rpm range, in order to overcome the lack of torque issue compared to modern 600 c.c. bikes.

On downtown rides the Fazer is an easy bike. Initially the steering lock is superb for a motorcycle and it will be a great help maneuvering the bike.
Filtering is also very good, since the bike is comparatively narrow fitting nicely between cars. It should be remarked that the height of the handlebar and mirrors is the same with cars’ and SUVs’ mirrors respectively. Thus a small scooter could be filtering better than this, although the rider of a Fazer S will not have any complaints whatsoever.
Comfort to the rider over road imperfections is good. The FZS Fazer is considered a comfortable bike by any standard. The weight of the bike in case of traffic jams is the only real issue for the rider.

On B-roads the FZS Fazer combines superbly agility with stability. She is a genuinely balanced bike, inspiring confidence to the rider mostly due to the quality of riding.

At the fast pace the FZS Fazer is also a reassuring motorcycle providing satisfaction to the rider. Naturally, constant gear changes are required to keep the revs higher than 8000 rpm. Despite the tires were old in terms of manufacturing date, feedback to the rider was relatively good, while handling is also good, even by modern (2013) standards.

Actually in specific cases the handling is even better than contemporary bikes of this displacement and character. An example could be extracted from as close as the FZ family: this sort of handling is literally better than the following Yamaha FZ6 Fazer (2004-2012), which feels feather-light at the fast pace which is a disadvantage. However the FZ6 provides better usability since the lighter weight is an advantage on daily rides. If better tires and suspensions are mounted on the FZS Fazer, she could follow bigger and more recent bikes, scraping the pegs easily.

On the highway the FZS Fazer is a very good bike even by modern standards. Since the engine revs are increased, the disadvantage of the weak torque at the lower spectrum is not easily observable. Only in the case of an instant overtake, one or two downshifts will be required.
The bike is comfortable on the journey. With this aftermarket screen fitted, air protection and comfort to the rider are quite good. The travelling speed could be as high as 180 km/h (112 mi) which corresponds to 9000 rpm. The top speed is just higher than 220 km/h (137 mi) indicated figure.

Τhe brakes consist of twin rotors at the front together with four-piston calipers and a disk brake at the rear, featuring a single pot caliper. The brakes provide good initial bite, feedback to the rider and power. In other words they are an advantage to this bike.

Model history/reliability/build quality: The bike was introduced in 1998, the engine derived from the Yamaha YZF600 R Thundercat (1996-2003) featuring smaller carburettors.
In 2000 there were minor modifications, as an example a bigger fuel tank, a digital clock on the instruments and a spring preload adjustment at the fork. In 2002 the fairing was redesigned, the efficiency of the lights was improved, while the fuel tank capacity was increased to 22 liters.
The build quality is quite good. Being serviced as scheduled, the FZS Fazer may provide high trouble – free mileage.

Comments: The storage space under the saddle is adequate for a rain suit. The lights are just moderate. The bike tested was equipped with lots of extras, e.g. top case, panniers, bagster, engine protection and a small fender at the rear - chain protection made by carbon fiber.
Eventually the FZS600 Fazer is a decent bike even by today’s standards, that is compared even with modern street 600 c.c. motorcycles, providing equivalent handling with them. This meticulous care about handling at this bike category was not provided by manufacturers after this bike though.

Thus from one point of view, when this bike was discontinued in 2003, the four Japanese manufacturers made a pause to their handling improvement effort at the everyday 600 c.c. bike sector, up to the end of the 2000-2010 decade. This tactic tempted more manufacturers to this stagnancy, despite the changes introduced to the bikes and the nicer styling.
From the beginning of that decade, the supersport 600 bikes were evolved to a point that they exceeded the riding skills of the mythic average rider, by a great extent. Generally speaking however, the handling of the new naked or street 600 c.c. motorcycles in 2013 is still just one step ahead of that humble Yamaha FZS600 Fazer (1998-2003) and in specific cases its just equal or even worse...

+ Various fields of use

+ Remarkable value/price for a used bike 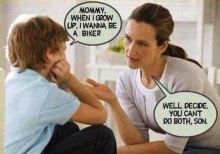