The bike tested was brand new. The performance described below is inferior to what a future buyer will experience, riding a properly run-in motorbike.

Actually engine response is genuinely linear. The operation of the engine at the low end of the spectrum up to 4000 rpm is adequate for leisure urban rides. At the 4000 rpm figure, the sound of the engine is altered, reminding that of the KLE 500, which is not one of the editor’s favorite sounds, although this is an subjective taste. If gear shifts are performed at the region of 5000 rpm, the new ninja accelerates ahead from cars at traffic lights.
If this is done at 6000 rpm, acceleration resembles to that of a big, nimble motorbike. With the top, sixth gear selected, the speed of 100 km/h (62 mph) corresponds to 6600 rpm, which is very satisfying for this small engine displacement in case of a slow pace of travelling. The indicated speed of 150 km/h (93 mph) correspond to 10000 rpm. The rev limiter intervenes at 12900 rpm. On a sporty type of riding engine revs should be kept between 9 to 11000 rpm as the power curve feels rather flat at the top end.

Compared to the ninja 250, the engine is greatly modified, except from the increase in capacity and the fuel injection, resulting to a very noticeable power increase on the road. The light clutch is very handy at the off in a racing style, although engine revs should be kept higher than 10000 rpm for a decent result. The bike tested was brand new. The performance described below is inferior to what a future buyer will experience riding a properly run-in motorbike. This is probably the reason that it was difficult to find neutral at the bike tested.
The ninja is equipped with slipper clutch and a special deflector which redirects hot air from the radiator fan, so it exits the bottom of the motorcycle instead of being blown onto the rider. As the review was conducted with cold weather and the engine capacity is small, the importance of these systems was not justified. An indicative average fuel consumption figure is 3.8 l/100 km (74 mpg Imperial).

Riding position: The height of the saddle is relatively low, (785 mm - 30.91 in), which is marginally higher than the ninja’s 250 (775 mm - 30.51 in.), one of the easiest bikes around for really short riders to step both feet confidently on the ground. It should be stated that the ninja 250 was the greatest in terms of engine capacity and genuinely small in terms of seat height, bike,  for riders of this stature to buy. Thus this difference derives mostly because of an increase concerning the width of the saddle of the ninja 300. This is a disadvantage rectified for the majority of the riders.

Rider is placed mostly on than in the bike, riding position is typical street yet sporty.
The pillion is placed much higher than the rider, exactly like  a supersport 600 c.c. bike. In the case of an everyday bike intended for various fields of use, it’s a disadvantage for the pillion to be placed that high. This difference in height is acceptable only in case that the pillion is much shorter than a very tall rider. The room on the pillion saddle is limited, the knees form a relatively steep angle, the hand-grips provided are smart indents at the tail section. Consequently usability for the pillion has been sacrificed providing more decent looks and sporty sensation. In other words the pillion doesn’t feel quite assured since she/he is far away from the rider exactly like on a supersport 600.

The dimensions of the bike are normal, the widest area is the handlebar and the mirrors. The weight is 174 kg nominal curb for the ABS version although it certainly feels quite lighter than that, probably due to the low centre of gravity. Thus usability is increased considerably and the ninja 300 may be suitable to female riders just like the ninja 250. The nominal weight of the standard model is 172 kg (379.2 lbs), while the weight for the ninja 250 was 165 kg (363.8 lbs).

On the road: A conventional 37 mm fork is equipped at the front, there is a linkage at the rear shock. The only possible adjustment for the rider is the spring preload, at the shock. The default setting is the second softest out of five increments. The firmness of the suspensions is average.
OE tires are IRC Winner with dimensions 110/70-17 at the front and 140/70-17 at the rear. Concerning handling they are a moderate choice in respect to the bike’s potential especially on slippery roads.

In town the Ninja 300 is a neutral bike, which will be satisfying to any rider. The riding position provides alertness, torque provided is quite good on everyday riding, the bike is comfortable and robust at the same time.

On downtown rides, the little Kawasaki is really capable to get the job done. Steering lock is good.
Street bumps are absorbed well from the fork, relatively good from the shock. Thus while the bike provides a nice robust sensation, large potholes will be felt by the rider, especially from the shock.
Filtering is relatively good, since the handlebar is lower than car mirrors. The height of ninja’s mirrors though is the same with car mirrors, quite lower than SUV mirrors. Eventually on traffic jams, the width of the mirrors could be narrower.

On B-roads the ninja 300 feels just the right bike to get a decent ride. The sporty riding position, the bike robustness and stability, engine linearity and power, all these contribute to pleasant and effective rides.

At the fast pace again the provided stability is the key riding feature. Agility comes second, despite the theoretically speaking fast steering geometry (1405 mm wheelbase, 93 mm trail, and a conservative 27° rake). The wide handlebar makes a decent lever to change direction swiftly. The bike feels light, nimble and robust, feedback to the rider is comparatively good, due to the OE tires.
The engine power is adequate to make things interesting on level and downhill sections, while on uphill roads the patience of a fast rider is required. New and average riders will not find any real disadvantage except from that the ninja 300 has not the power to provide thrilling acceleration.

Additionally it maintains an advantage of the former ninja 250: High speed cornering, while with decent rubber mounted, rider will enjoy it much better. Even in case of a series of road imperfections mid-corner the bike feels solid and planted, riding confidence is not decreased.
For a pace like that a minimum of 8000 rpm is required. The bike can handle even more power. Speaking hypothetically, in case that someone asked a ninja 500 in the future, the actual result would be very close to the er6f, this is the nearest following step on a motorbike.

On the highway the ninja 300 preserves a high travelling speed given the engine capacity. Specifically at the speed of 140-150 km/h (87-93 mph), air flux feels dispersed and it may be felt on the helmet and below that, at the level of the shoulders. Thus the ninja is not a travelling bike by any means, although it may perform small trips, providing slightly worse protection from the elements than a larger 600 c.c. supersport. Compared to the er6-f air protection provided is also inferior.
Eventually riding speed will be around 140 km/h (87 mph), not bad at all for a 300 c.c. bike, while top speed is almost 190 km/h (118 mph). An aftermarket screen would be a nice idea for riders wishing to travel more comfortably.

In case of a dirt road, the bike is stiff, its not really satisfying.
There are two-pots callipers and single disc brakes, 290 mm at the front and 220 mm at the rear. The front disc brake provides powerful initial bite and power, although feedback to the rider is average especially whenever the ABS intervenes. The rear brake provides relatively good power, average initial bite and average feedback to the rider. ABS pulsing at the levers is small at the front, average at the rear.
Thus the brakes are quite good given the category and the price of the motorcycle, while changing the tires would benefit braking feedback.

Model history/versions/optional/reliability/build quality: The Ninja 300 is based on the ninja 250 (2008-2012) with many changes though. The first ninja 250 was introduced 30 years ago, it was the GPZ 250 (ΕΧ 250).
The engine is fed by injection nowadays, the engine capacity is increased to 296 c.c. (from 249 c.c.), the exhaust and slipper clutch are new. The oil filter may be changed without taking out the cowling. The engine is supported on rubber mounts in order to decrease engine vibrations, so the pegs are aluminium now. The frame, the fork, the instrument, the potential to buy an ABS fitted on the bike, the wider rear tire and the sportier styling are additional improvements over the ninja 250.

In some countries the engine capacity remains at 250 c.c., while the above improvements mentioned are also included. This allows Kawasaki to comply with the national riding licence regulations. Below the saddle for the pillion there is a smart storage space accommodating small or somewhat higher objects. Its quite early to speak about reliability, build quality is very good.

Comments: This bike is suitable for the new A2 riding licenses o the European Union.
The design of the instrument and mirrors is quite smart. The combination of an analog rpm meter and a digital tachometer as well as the pale blue-white back light at the instrument provide a nice outcome for the standards of the category. An improvement in terms of styling was necessary compared to the old school styling of the ninja’s 250 dash. Additionally, there are only a few bolts seen on the fairing, while the styling of the bike reminds of the bigger ninja members, like the Ζ1000SX.
The screen is mounted further ahead from the front cowling, which could make things difficult for the rider cleaning the area just behind the screen.
Compared to the notorious ninja 250 which is replaced, the ninja 300 is a much better bike, mainly due to the reason that even if the engine capacity is marginaly larger, the bike meets the requirements of a rider much better, although it feels slightly more sporty.

Thus Kawasaki seems to accept happily the challenge of the rivals at the 250 c.c. category, especially in an era that there is a universal interest for small capacity bikes. Despite that in theory 300 c.c. don’t sound adequate, actually the bike exceeds the everyday requirements of any rider, and once again makes a rider ask her/himself: A 300 c.c. scooter or a motorcycle?
In case that the tag price is not the top priority, it’s the first time after many years that motorbikes once again create a distinguishable gap from the scooters at the 300 c.c. category, leaving them for the riders who seek mostly usability. Anyone interested in real riding on a 300 c.c. motorcycle?

+ Unprecedented wide field of use for this engine capacity.

- Price compared to the competition. 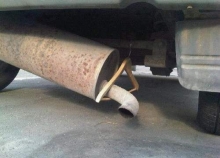