Actually a minimum of 3500 rpm is required depending on the selected gear to obtain surge-free acceleration. Engine response is linear yet obviously weak. As an example at the off on uphill roads, an extensive use of the clutch is required. The top speed of nearly 113 km/h (70 mph), is not influenced considerably by road inclination and adverse wind.

Due to the carburettor, a choke lever is provided at the handlebar on the left. In some countries engine is fuelled by injection. An indication of the selected speed at the gearbox is provided on the clock. The operation of the gearbox is good. An indicative fuel consumption figure is 3.8 l/100 km, (75 mpg Imperial), tank range is in the region of 300 km (186 miles).

Riding position: The height of the saddle is low, 790 mm (31.1 in), providing confidence to low stature riders. The pillion is seated quite higher than the rider, the space on the saddle provided is small and hard, which reminds slightly of a supersport 600 c.c. bike and that’s not an advantage!
The dimensions of the bike are the same with the 250 bike, that means increased for the 125 c.c. standards.
The weight of the bike is large for a 125 c.c. bike, 155 kg (342 lbs) nominal dry, which is certainly noticed.
Rider is placed mostly over the bike, riding position tends to be neutral: it is comfortable, providing alert at the same time.

On the road: Suspensions are soft. There is no linkage provided for the shock. Due to the design of the bike a hint for a Deltabox frame is provided, which is not the case of course.
OE tires are CST MΑOSPORT with dimensions 110/70-17 at the front and 130/70-17 at the rear. They are considered to be a moderate choice, especially on low friction factor roads.

On town rides the Wolf is neutral, providing unbiased, weak, yet effective rides. It will not impose any restrictions to the rider, except from the low engine power output.
Thus rider has to really rev the engine in order to obtain satisfactory acceleration. The riding and the feel of the bike on the road reminds of bigger bikes, favouring robustness than agility.

On downtown rides, steering lock is average for the standards of the 125 c.c. category, that means comparatively good compared to general motorcycle standards. Any rider would expect an even sharper steering lock from an 125 c.c. bike.
Filtering is good. Actually the height of both the handlebar and mirrors of the bike is the same with cars’ and SUVs’ mirrors. This doesn’t result to a problem though due to the small width of the bike.
Comfort over road imperfections is average. Rider will notice any pothole and bump on the road. Any advantage regarding comfort of the 250 c.c. bigger brother, has vanished.

On B-roads the robustness and the stability of the bike are the key riding features, agility comes second, despite the short 1320 mm (51.97 in) wheelbase. It’s a sure footed bike on the road, providing confidence to the rider which is a feature again that could belong to a bigger bike. Riding is satisfying to the so-called average rider, or on everyday rides.

At a faster pace, the petite engine will hardly propel the bike to a speed …affecting the handling. The bike feels again robust, even close to the top speed.
The OE tyres do not provide sufficient feedback to the rider especially on low friction factor roads. Consequently rider will not be tempted to perform spirited riding.
In case that the rider will perform any tyre and suspension modifications, probably nimble riding will be improved, although engine limits will be more obvious.

On the highway the Wolf 125 will carry a speed between 100-110 km/h (62- 68 mph) at the most. Rider doesn’t feel safe in terms of active safety to accelerate away from any difficult situation. It’s not recommended.

A 260 mm petal rotor together with a two piston radial caliper are equipped at the front. An 150 mm drum brake is provided at the rear. The front brake is linear, comparatively powerful, providing wooden feedback though. The drum brake is powerful, linear, providing relatively good feedback to the rider.
Thus the drum brake lives in harmony with Wolf’s 125 character, while the front disc brake could be better.

Comments: The nice design refers to a streetfighter motorbike, providing interesting details which make some bigger naked bikes look quite more common! The rims are nice, reminding of the Honda CB1000R rear rim, while the headlamp looks like Yamaha XJ 6n (FZ for the US)! The pillion handlebar, the blue light on the display, the LED tail light and the metallic paint, make the Wolf a qualitative bike.

From the other hand the protecting plate of the silencer doesn’t cover it at the side, which doesn’t look nice from that point of view. A centre stand is not provided which doesn’t help usability. The switch at the right handlebar activating the lights could have been omitted. On the contrary the achieved top speed indication will be fancied by the younger owners!
The bike may be equipped with a top case together with a factory rack. A feature to be improved is the operation of the kick stand which should not be trusted easily!

From 2010 onwards, the Sym Wolf 125, X-Wolf and Wolf Classic are manufactured, which seem to be very different from the SB 125. Also they feature a retro design. Concerning the SB (T1), an 150 c.c. version is available in specific countries. Build quality and the plastic parts assembly are indicative for the Sym factory, that means superb. Conclusively following the manufacturing of scooters, Sym proceeds to motorcycles, with cautious, thoroughly planned and important steps.
The Wolf 125 is definitely a low tag price targeted proposal. However compared to the superb Wolf 250 c.c. it lacks clearly in terms of engine performance, suspensions and brakes. Thus the much lower tag price may be justified. The design of the Wolf 125 declares a bigger and more expensive bike, which is the case really, since it’s derived from the 250 c.c. version. However in real life and compared to the rivals, the riding provided is average. 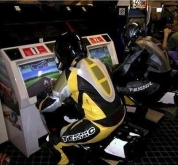