At any speed higher than 80 km/h ( 50 mph) engine revs are considerably increased. Thus, in case that the Wave never carries a pillion, or there are no significant uphill - downhill roads in the region, transmission could be slightly lengthened. This would deteriorate the punchy acceleration though, which is useful on everyday rides.
Shifting gears does not provide the familiar detailed Honda semi-automatic gearbox feedback to the rider, which is a disadvantage. An indicative average fuel consumption figure is 2.3 l/100 km, (123 mpg Imperial).

Riding position: The seat height is low, 760 mm (29.92 in), which will be very suitable to low stature riders. Rider is placed in and over the Wave, riding position is neutral.
Pillion is seated slightly higher than the rider, the seat is soft, the angle of the knees is slightly sharper than ideal, the hand grab is narrow.

The dimensions of the Wave are average for the standards of the category. The leg shield is comparatively narrow. The weight of the bike is actually light, 99 kgs nominal kerb, (218 lbs) and it is certainly noticed as such.

On the road: Suspensions which are not adjustable, are comparatively soft. The fork rebound is relatively fast. OE tyres are CST with dimensions 70/90-17 at the front and 80/90-17 at the rear. They are a moderate choice, especially on low friction factor roads.

On town rides the Wave proves to be very agile and user-friendly, which is common though to any cub of this price category. Engine performance will meet rider's requirements. There is no other prominent riding feature concerning the Wave on town rides.

Downtown rides are superb. Due to the exceptional agility, the Wave will take advantage of any traffic gap. It should be noted that the wheelbase is 1227 mm, (48.31 in). Together with the Vision, it’s the second bike from Honda which is that good on downtown traffic. Steering lock is splendid.
Filtering is very good, despite that the height of the handlebar and mirrors is the same with cars’ and SUVs’ mirrors height respectively. This is mostly due to the narrow width of the Wave.
Street imperfections are absorbed moderately, which could be improved. Despite the 17 inch wheels, rider notices any pothole, which means that the cost reduction affected the shock absorbers too, hence comfort. This is a disadvantage on poor road surfaces.

On B-roads, agility is once more the key riding feature. Actually its so obvious, that rider will not deal with the issue of handling, since it reminds any moped manufactured 10-15 years ago. This is common in this cub category.

At the fast pace, the engine proves to be weak, while the OE tyres do not provide sufficient feedback to the rider on low friction factor roads.
On the straights where the Wave may be ridden close to the top speed (or even faster in case of downhill straights) in windy conditions, the cub becomes edgy, a minor weave is produced. Additionally on sweepers stability is decreased, the Wave feels edgy, once more.

Due to the engine performance, riding on any highway is not a wise thing to do, even on short rides.

Model history/versions/optional/reliability/quality build: The model name Wave is famous in Asia for quite some years now, describing the NF models.
Under the seat, a 7 l storage space is provided, which shouldn’t be adequate even for a jet helmet, although it may accommodate a small shopping bag or a rain-suit together with some tiny objects.

A centre and a kick stands are provided. The breaking news for the motorcycle industry in 2012 is that the kick stand is operating well (!), which is an extraordinary feature for this bike category. The centre stand is also practical, although that’s not news at all.
The quality of cowls and parts assembly is improved compared to that of the NF-ANF Innova, although pressing the cover of the clock on the Wave tested, was producing some crackling noise. The finish is deep and superb, which makes the Wave look far more expensive than it actually is.

Comments: The horn and indicators switches have mutually changed their places at the left side of the handlebar. This will not be welcomed by riders who own a second bike with conventional switches, because it will require some time for familiarisation.

The design is superb, which makes a step further, beyond Yamaha’s Crypton T 110. The leg shield area is the most futuristic, there are many curves and angles there. The grey colour at the bottom of the leg shield and above the engine, will help the Wave look slightly cleaner in case rider is not very meticulous with cleaning.

There are two disadvantages which are considered the most important in the case of the Wave, that is the operation of the gearbox and the comfort over imperfections, deriving from the two shocks at the rear mostly.
Maybe there are higher expectations from any bike featuring the Honda badge on it, although the superb finish of the Wave lures the future owner for a stunning bike purchase. Well, at least in this review, the list of disadvantages is almost as long as the advantages area…
In comparison with the more expensive NF-ANF Innova 125i, the Wave due to the shorter gearing, retains an equivalent acceleration on town rides. However its inferior in terms of comfort-handling and top speed. Its more agile though and cowl parts assembly is better.
Thus these two Honda cubs are not internal rivals, since they are two different characters and Innova is a more capable all around bike. On the opposite, only in case of those horrible traffic jams, the Wave boasts an actual riding advantage compared with the NF 125… 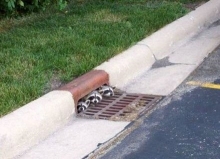