Actually, despite the age of the engine, the performance provided  is still a  great advantage for this bike.  Throttle opening from  1500 rpm is not a problem for the engine. Engaging one of the initial gears, there is no surging from as low as 1000 rpm! The thrust provided can be felt from 2000 rpm upwards.

Engine response is linear albeit at 7000 rpm a minor power step may be observed.  The rev limiter intervenes at 12000 rpm, indicated figure. The power provided is great given the engine capacity and the character of the bike. An indicative fuel consumption figure is  5.6 l/100 km, (50 mpg Imperial).

Riding position: Τhe height of the saddle is  average,  it will be adequate to average stature riders or higher. It should be reminded that the seat height and the handlebar, are adjustable. Rider is placed in and over the bike, riding position is neutral.  Rider’s hands are spread wide at the front, the handlebar is high.
The pillion is seated quite higher than the rider, the stiffness of the seat and the space provided are average.

The dimensions of the bike are also average for a 600 c.c. motorcycle. The bike feels heavy which is due to the 191 kg (421  lbs) nominal dry weight. The ABS version is 6 kg (13.22 lbs) heavier. This is an issue when the bike leans to either side static or when rider has to push the bike, otherwise the weight is well hidden.

On the road: A 41 mm fork is equipped at the front, a single shock at the rear. The suspensions feel soft, the spring preload at the rear is adjustable in seven increments.
The tires fitted on the bike were the Pirelli Diablo Rosso  with dimensions 120/70-17 at the front and  160/60-17 at the rear. They are considered to be a very good option for this bike.

In town the bike is neutral and user friendly. The bike provides the agility which is necessary to the rider. The engine performance which is superb, is very helpful to the rider.

On downtown rides the CBF N is also a great bike. Steering lock is quite good. Filtering is very satisfying although the height of the handlebar and the mirrors is the same with cars’ and SUVs’ mirrors respectively. The small width of the bike is the reason to that.  Comfort over street imperfections is really good, the  CBF N  is a comfortable bike.

On B-roads the  CBF N lives in the best of both worlds, between agility and stability. Rider will be satisfied also due to the user friendly character of the bike. The handling of the CBF is predictable.

At the fast pace feedback to the rider is average, although the tires mounted were relatively old. At a pace like this the bike makes it clear to the rider that this is not the optimal field of use. The CBF is not tempting the rider to attack into corners. The engine is once more an advantage to the motorcycle, since there is always instant, usable power provided without the need of continuous gear changes.

On the highway the CBF N is a vey capable motorcycle, at least as much as any naked bike. The engine revs happily at 150 km/h (93 mph) which is the maximum speed for any naked on the highway before the rider gets buffeted by air. Of course no downshifting is required to overtake.
However the   CBF 600  variant  provides an absolute advantage on the highway due to the half fairing featured, increasing substantially the comfort to the rider and marginally  the travelling speed (170 km/h 105.6 mph). Top speed is close to the 220 km/h (137 mph), indicated  figure.

There is not an ABS equipped at the specific bike. Two 296 mm rotors are featured at the front together with four piston calipers and a 240 mm rotor at the rear with a single piston caliper.
The front brakes are linear, providing comparatively good feedback and power. The rear brake is also progressive, providing good feedback and power. Thus, the brakes are quite good and user friendly which is an advantage to a bike without an ABS.

Model history/versions/reliability/build quality: The engine derived from the CBR600F and the Hornet of that era.  The CBF 600 version was also available, featuring a half fairing. Thus compared to  CBF 600, the  CBF600N boasted a smarter styling since the   CBF 600 was quite blunt, (maybe a personal taste here) although the  CBF600N lacks in terms of touring potential.
Both versions  could be  equipped  with an optional ABS. In 2006 the naked variant featured color changes. In 2008 the new CBF 600 was introduced with substantial changes concerning the frame, engine and fuelling. Build quality and finish are quite good. Nowadays the styling  remains  neutral, which is the classic styling of a naked Honda.

- Handling at the fast pace 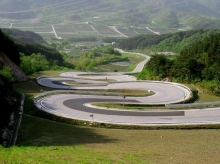