Shuhei Nakamoto: The HRC will talk with Lorenzo about the 2015 season

The HRC Vice-President, Shuhei Nakamoto had an interview with the Spanish newspaper Marca.com. During that interview he said that Marquez, Pedrosa and Lorenzo have two year contracts which will end in a year.
Nakamoto said that he will have talks with all of them.

Comment: It is very possible that the HRC will try to lure Lorenzo as he is the most integrated and committed rider on the grid, the only one to diminish the advantage of the Honda bikes. 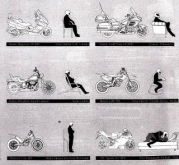