Honda will introduce the new version of the CB1300S, which will be called CB1300S Super Bol D’or. The bike will feature new bodywork, new wheels, LED headlight and a six speed gearbox.

There could be two versions of the CB 400, the Super Four (naked) and the Super Bol D’or (upper fairing). The design of this bike is about 20 years old, although the stunning build quality and the four cylinder engine, can still lure potential buyers.

The Dunk is a 50 c.c. scooter intended to youngsters. It features ACG start system, LED tail light, large underseat storage space. These bikes are expected to be officially unveiled at the Tokyo motor show on November 20th.

They could be indented to the Japanese market, although Honda’s perception of global bikes could change that. The CBR250R will remain in Japan, it will not be upgraded to the CBR300R variant. However the styling will be the new one, which was recently introduced.
Enjoy the video 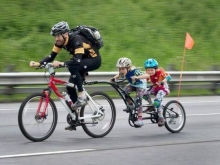