Updated-Elbow dragging: The ad for the final motoGP of the season by Repsol Honda


It is most likely that Marquez will be the 2013 motoGP World Champion and he will get the title either in Australia this weekend or at Motegi Japan, in ten days time. However the last race of the season will be the following one at Valencia on November 10th. Repsol Honda has produced an advertisement for that race and its all about Marquez’s elbow dragging style.

It was evident one year ago, as soon as he begun testing the 1000 c.c. motoGP Honda and up to now, there always have  been some very nice shots of his leaning to the limit. Speaking about it in the past, he said that when his elbow touches down, he understands that he can lean the bike a little further…Enjoy!

Marquez: The conditions for the Title!

Marc Marquez has been impressing to the MotoGP Championship, braking many records! What remains for the 20 y.o. HRC rider is to get the Championship title, which could occur in Australia. That would make him the youngest World Champion, by the time of Kenny Roberts, back in 1978! Here are the scenarios for the rookie Marquez to seize the motoGP Championship!

The above assumptions are what statistics dictate, however the most possible scenario is the first, with Marquez winning in Australia and Lorenzo finishing third.
It should be reminded that Marc Marquez acquired the moto2 title last year in Australia!
Of course if non of the above combinations occur at Philip Island and the three top riders finish in any other order without injuries, Marquez will have a lot more chances to get the title on the next round at Motegi- Japan on the 26th of October! 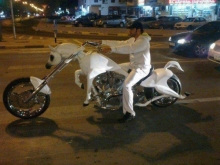