The second prototype on the Eicma  display is the True Adventure Prototype. Two key elements derive form this mud coated prototype: A 21 inch front wheel is equipped and the engine is parallel twin.
No technical details, information or the production date on the True Adventure prototype are available at this time.


Another image of the upcoming Honda Africa Twin


Another image of the upcoming Honda Africa Twin has been published, showing an off-road oriented bike due to the tyres, the saddle and the engine protection.
Although there should be more speculation in the future, the new bike should be quite light and agile, bridging the gap between the NC700X - Crossrunner VFR800X and the Crosstourer. It will be rather extraordinary from Honda to present a radical off-road bike at this segment

Will the new Honda Africa Twin resemble to the CRF 450 Rally?


According to a sketch and information from the German magazine Μotorrad.de, the new Africa will look like the CRF 450 Rally racing bike which is available to privateers. The new bike is expected to feature a 900-1000 c.c. engine which will deliver about 100 bhp, the bike will weigh up to 200 kg (440 lbs) and the front wheel should be 21 inches.

The General Director of Honda Italy, Vitto Cicchetti has recently revealed during an interview that the new Africa will be introduced probably at the Intermot motorcycle show in Cologne Germany in 2014 and will be available at the dealerships by 2015. The engine is expected to be twin cylinder again, the bike will be quite innovative in many ways and the styling will get many off-road features. It is not yet known if a DCT gearbox will be featured. Additionally it is not yet known if the new bike will be named XRV.

Since the NC700X and the Crossrunner VFR800X are remarkably smooth, on-road oriented bikes and the Crosstourer is very big and heavy for everyday use, Honda’s line-up leaves some vacant space to be filled by the competition of the Bmw F800GS and the Triumph Tiger 800. 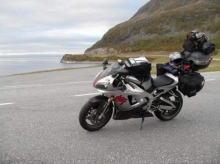