SRC Kawasaki chalks up its 4th win at Le Mans and Suzuki Endurance Racing Team takes its 13th World title
SRC Kawasaki has added one more to its streak of three wins at the Le Mans 24 Hours.

Despite a minor crash for Fabien Forêt towards the end of Saturday afternoon, the factory Kawasaki with Nicolas Salchaud as third man quickly made its way back into the leading trio and went on to benefit from the mechanical problems that dogged BMW Motorrad France Team Thevent.

The BMW ridden by Sébastien Gimbert, Sylvain Barrier and Josh Waters was in the lead for nine hours before a broken gearbox forced it out of the race during the night. The amazing Suzuki of R2CL took the second spot on the podium. This much fancied private machine with Britain’s Guy Martin and French riders Gwen Giabbani and Dylan Buisson on board pulled out a perfect race, totally undaunted by the factory teams. The R2CL finished 7 laps behind the SRC Kawasaki but managed to hold off the Yamaha France GMT 94 Michelin Yamalube.

After night-time crashes that affected the gearbox, David Checa, Kenny Foray and Matthieu Lagrive clawed their way back on to the podium, finishing third, two laps behind the R2CL.

The 32nd race will start in about an hour. The Kawasaki Team has been winning the race for the last three years.
Suzuki Endurance Racing Team has remained on Pole for the Le Mans 24-Hour World Endurance final round in France after improving its overall combined time to 1:37.877 in Friday's final qualifying at the Circuit Bugatti (Le Man).

Agnes Dupuy's Team described further below will also race. Some images from the race live follow:

Certainly a female racing motorcycle team is not any striking news. This team will enter the famous race in France with two Suzuki GSXR 1000 race bikes. The team manager is Agnes Dupuy, winner of many endurance races and the riders are Caroline Loccusoi, Amandine Creusit, Steffie Naud and Erika Jeannout.

So what’s the fuss all about? Once upon a time, Erika used to be Erik, a fast biker participating also in endurance races and yes assumptions are correct, now she is a transsexual. The team sponsor will also be organizing a debate with the topic “Are you for or against transsexual racers in competitions”?
The race in this spicier form for 2013, will be conducted on the 21st and 22nd of September, some 800 laps will be completed. Good luck and a good race to all!! 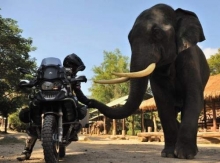