Double win for Valentino Rossi at the Monza Rally Show. He prevailed also at the masters show!

Jorge Lorenzo (Citroen WRC DS3) was tenth overall, +2m 34.6s after just over one hour of timed competition. At the end of the race Vale was quite happy with his win and the contrast between this and his 10th place at the motoGP Championship saying “It would be perfect if we finish like that in the following year at the motoGP!”

Vale also won the Masters show which was a race at the straight of the circuit, in memoriam of Marco Simoncelli. Vale was the fastest at the qualifying practice, also faster than Dovizioso at the semi-finals.

The final race was between Rossi and Dindo Capello. The latter did a mistake and Rossi took advantage of it winning the race by over eight seconds! 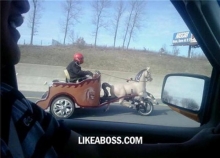