The two riders, Roberto Rolfo and Christian Iddon will  race and develop a brand new bike for the World Supersport Championship.

The silencer seems stock, although an Akrapovic sticker is shown on the screen.

Except from that a historic firm of exotic bikes is racing once more at the World Championship, the striking news is (for the time being) the Italian motorcycling beauty.

2012/11/23.      The agreement which includes a three years contract was announced yesterday. The three cylinder MV Agusta F3 675 will be racing in the 2013 World Supersport Championship.
MV Agusta has accumulated 37 World championship titles, many of them with Giacomo Agostini.
ParkinGO has experience of developing different machinery, having raced Triumph's 675 Daytona in the World Supersport class in 2008, 2009 and 2010. The team then lifted the World Supersport title in 2011 with Chaz Davies, after switching to Yamaha's YZF R6, a bike which had not been raced the previous year. The team then moved up World Superbike with Davies, racing an Aprilia RSV4, on which the Welshman scored a win and three podiums.

Though no rider has yet been named, there are rumours that Luca Scassa will be signed up to race the F3. Scassa knows the team, having partnered Davies for the team in 2011, and knows MV Agusta, having raced with the marque in Superstock 1000 in 2006 and 2007.

Giovanni Castiglioni President MV Agusta
“Its a great satisfaction to announce this agreement with the Team ParkinGO. Personally speaking, for me is a big and exciting challenge as I have got from my father the passion for the racing world. I am convinced that with the experience of Massimo Bordi, engineer, involved in this project as well, we have all the components needed to get important results.”

Giuliano Rovelli President ParkinGO
“This morning my brother Paolo and myself, were talking about the big responsibility and at the same time the great satisfaction we feel signing such an important agreement. Already from the first meetings has been a good understanding with the management of the company. Both of our foresights in the project, are an important component to get the best out of this partnership.” 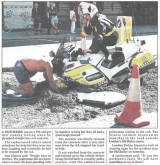