Scoop: The new Bmw R1200R is liquid cooled, no Telelever

The bike will be introduced at the end of 2014. The engine gets liquid cooled and an inverted fork is replacing the Telelever.


Does the Bmw R1200R also get the new liquid cooled engine?

Its only three weeks before the Eicma motor show and some new speculation is spreading: The R1200R could follow the R1200GS and the R1200GS Αdventure, getting the liquid cooled engine.

A dynamic roadster with an exclusive design, a few months before the launch of the new R1200R. Compared to the previous bike there are only color changes.

The firm Wunderlich manufactures accessories for Bmw motorcycles. At the facebook website of the firm, there are images of a new sporty-naked and an R1200RT.

Bmw has already informed of a new naked bike, a few days ago. From the images shown, the new model features the chassis and engine of the R1200R, although the inverted front end, the radial calipers and the spoked wheels are in accordance to the image released by Bmw.

Petal rotors are featured. The saddle is extended quite at the front over the fuel tank. Τhese two parts, rotors and saddle could be modifications performed by Wunderlich, as they defer from the Bmw sketch. Thus if these images are real, the new bike is differentiated from the roadster R1200R, being more sporty.

Additionally the R1200RT is changed according to the image published at the Wunderlich facebook site. The styling of the front resembles a lot to the C600GT scooter, while the engine is liquid cooled. Additionally the front end is inverted, radial calipers are equipped. 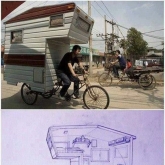