The scooters had been confiscated after Piaggio’s appeal during the 2011 November/December Salon de la Moto et du Scooter in Paris.
According to the court’s decision, the manufacturer of the counterfeits will pay also all the legal costs.

There are Chinese imitations for too many things, trying to sell at the home venue of the original item though, is a different story altogether. Especially if this is Italy, where, people take their scooters very seriously indeed.

Piaggio pressed charges and the bikes were confiscated by the “Guardia di Finanza”, which belong to the Ministry of Economy and Finance. The bikes were counterfeits of Vespa scooters, five of them were electric and one equipped with an internal combustion engine.

The two out of  five stands closed as they didn’t exhibit other models except from the counterfeits. Last year, in Eicma 2011 two more scooter were confiscated, where one of them was a copy of a… Piaggio MP3.
http://www.motoblog.it 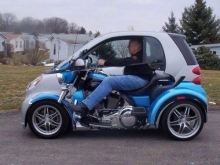