Comment: The three cylinder engine layout as it has been successfully featured by Triumph in the last 20 years becomes a trend among the  manufacturers (MV-Agusta and Yamaha for the time being). 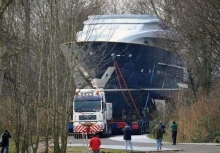