A road bike using the same engine as BMW's G650GS has been unveiled at the Chinese motorcycle show.


Chinese firm Loncin, which makes the single-cylinder 650 engine for BMW under licence, is using it to power its new CR9 naked roadster.

It comes with the same 47bhp power output as the BMW and costs just over £5,000, (6200 Euros-$8000). But because of the firm's licence with the German manufacturer, the machine cannot be sold outside China, according Loncin's Deputy General Manager Mike Shen.
Shen said: “We've had an operation with BMW since 2005 and we have exported more than 35,000 units to them in the past five years, so this is a mature engine. “But we have an agreement with BMW to supply the CR9 only in China. So we cannot sell to the UK at this moment."


Comments: 1) Τhe name CR9 refers to a …spark plug, (NGK).
2) A Bmw engine, (it was built by Rotax in the past), styling which refers to Sym Wolf, although the frame-swingarm-inverted fork- twin rotors at the front, refer to a high-tech motorbike! 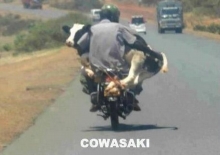