Developed by Honda Racing Corporation (HRC) and Honda Motor, the RC213V-S is a road going prototype of the awesome Championship winning MotoGP RC213V machine. No technical details, information or the production date on the road going RC213V-S Prototype are available at this time.

Will the new Honda RC213V-S be unveiled at the EICMA motor show?


After two years of rumours, Honda filed yesterday 2014/10/31 a trademark application in EU for the name RC213V-S which indicates that the upcoming bike will be introduced at the EICMA motor show next week.

The letter S stands for  a street version of the Honda motoGP RC213V race bike. Hence the RC213V-S will be a limited edition motorcycle and the price is expected to be suitable only to very few people on this planet! Thus she will not replace the CBR1000RR.
The 1000 cc V4 Honda RC213V-S is expected to be advertised as “an RC213V with lights”.

Surprise-surprise: The Honda RCV-1000 will arrive with a V4 90 ° engine!
The engine layout of the rumored limited production bike is depicted in patent drawings, which were submitted in 2012 although they were revealed just a few days ago.
The drawings concern the water pump, driven by the camshaft of the forward cylinder. The CBR 1000 RR styling on the drawing is not really significant.


The upcoming Honda RCV1000 and the never ending rumors

New images of the bike to be unveiled, as soon as the Eicma motor show according to the latest rumors!
There are several would-be-pictures circulating on the Internet already with even more speculations about the specifications and the price.

On the July 31st issue of Motorcycle news, MCN - the British motorcycle newspaper, claims for world exclusive news concerning the oncoming Honda RCV which is expected to be officially unveiled in a few months time. The MCN website published this picture.

According to a Japanese magazine it could be. Time will tell. 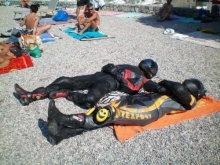