2012/9/20       Peugeot will soon reveal Onyx in Paris Motor Show, a concept of scooter/motor bike with three wheels. In addition to its sculptural design, the “super trice” has a hybrid motorization. There are three vehicles to be presented soon in Paris with the astonishing design, christened Onyx: a supercar, a bicycle and a scooter.

Exercise of style of the French manufacturer, it represents his vision of the future. It comes out from it three achievements “carved with readiest of the matter”, employing rough materials. But let us leave side the car with the V8 engine and the radical dress, as well as standard bicycle CLM (Against the Watch) on side, to interest us in the alternative Onyx which challenges us more: the scooter three-wheeler of the future.

Peugeot presents its new Concept Scooter Onyx to three wheels like a “supertrike” able to be transformed in the motor bike or scooter. It is presented under “sculptural lines”, its filiations with the world of the motor bike being done visually thanks to its back of 200 mm width, a little with the image of the famous three-wheeler Edge-Am Spyder. Side motorization, the hybrid name of Onyx takes all its direction with the sight of its thermal engine of 400 Cm3 associated with its electrical motor placed in the aft wheel, supplied with batteries lithium-ion.

Still a three-wheeler for the Living rooms…

No data sheet is for the moment available. Two positions of control to the choice are possible, Sport or Urban for the rider. Obviously, the position in sporting mode implies more constraint, with supports on the more marked wrists, more lengthened position and feet positioned backwards. As a mode Urban, one employs a typified position scooter, right bust. Onyx is practical; the pilot indeed discovers a filing space (for 2 helmets) placed between the saddle and it before vehicle. The scooter three-wheeler Onyx presents in a black color chechmate and, as the car, exposes certain parts coppers some untreated, an “a live material” announces us one, which should evolve with time. At least if, in a form or another, Onyx comes out!


Comments: The key element missing is the weight figure. Presumably it should be a heavy three wheler, due to the batteries. However if it is not and assuming that this scooter features the superb handling of the three wheeled scooters tested so far, the Onyx should be truly fast. On specific routes and in case of low – average friction tarmac, it would not be a surprise if the Onyx could be considered to be a challenging scooter for normal, medium engine capacity bikes.

It is known that Peugeot manufactures cars, scooters and bicycles. It’s the first time though that the French design unifies the styling of their products.
In the recent years the matt black color is a fashion trend, mostly in sporty cars, less in motorbikes. The following step was the combination with copper. The European Design School as expressed mainly by Italy and France, is clearly leading the way! 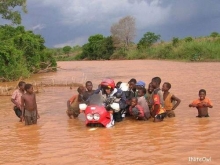