The 2013 Pata European Junior Cup, powered by Honda, gets underway alongside the World Superbike championship at Motorland Aragon in Spain (12-14 April). The series features a  field of 34 young racers, aged 14-19, from 18 different nations, all racing Honda's new CBR500R at eight European circuits.

That power figure may seem oddly precise, but it’s spot on for Europe’s new A2 license tier, which will allow 19-year olds to ride bikes with up to 35kw of power. Or 46.9 of your good old-fashioned horses. Of course, targeting European learners, Southeast Asian, South American,  Canadian riders and  Americans means that Honda is chasing one other metric for the CBR500: fuel-economy and low tag price.

Comment: Given these specifications, a basic, rather heavy motorcycle is outlined. Is this what many riders are now willing to pay for?

If you wanted further proof that Honda is getting ready to debut a 500cc CBR, look no further than the fact that the 2013 European Junior Cup has been tipped to switch from the KTM 690 Duke to the Honda CBR500 when the middleweight sport bike debuts next month at EICMA.

A cheap way to get young racers honing their skills on the track, the European Junior Cup is an ideal venue for the Honda CBR500, which is expected to differentiate itself from the CBR600RR by being a less-sporty entry-level machine for newer riders. The European Junior Cup is for young racers ages 14-19 and runs at select rounds of the World Superbike Championship. This season, the series used the KTM 690 Duke but when it was first introduced in 2011, the serious used the Kawasaki Ninja 250.  Until now, the Honda CBR500 has also been rumored since its leak in Southeast Asia last month. While we wait for full details on the machine, it is expected that the 2013 Honda CBR500 will be a bike with 500cc parallel twin motor, essentially a Honda CBR250R engine with an extra cylinder. It also makes logical sense that the Honda CBR500 would be the next progression in machine for a rider currently on a CBR250R.

It is not clear whether the Honda CBR500 will be sold to North America for 2013, though if Honda’s succession plan holds true, it could be a future model at some point. One thing is clear though, the bike will come to Europe for 2013, as it is now known that it powers the EJC.

2012/9/13.     If you believe the Honda CBR 250 Forums, Big Red is set to drop some 500cc machines at INTERMOT/EICMA later this year. Expected to be lower-spec models built in the company’s Thailand factory, the 2013 Honda CBR500 & 2013 Honda CB500 are interesting offerings that fall in between matrix of the Honda CBR250R, Honda CBR600RR, Honda CB1000R, and Honda NC700S.
It is not clear what market Honda intends to drop these models in, though we are having a hard time seeing either the Honda CBR500 in North America, but both bikes do represent an added stepping-stone in Honda’s model lineup for new riders. One thing is clear, manufacturers like Honda are starting to question the previously proscribed displacement categories with their new models.

Looking at both bikes, it is clear that Honda is channeling heavily from its common parts bin. The CBR500 is very CBR600RR-esque in its appearance, though looks decidedly less aggressive. This is an interesting departure from the Honda CBR250R which just looks very sport in its diminutive package.
The styling cues seem are reminiscent of the Kawasaki Ninja 650 and the previous generation Kawasaki Ninja 250. The styling move is surely to keep the Honda CBR500 off the toes of the venerable Honda CBR600RR, but also creates an interesting question of whom Honda sees buying this motorcycle.

The rumored 2013 Honda CB500(R?) makes a bit more sense in Honda’s lineup. With the Japanese manufacturer already offering the Honda CB1000R on a variety of continents, a half-sized version makes perfect sense.
More road-oriented than the Honda NC700X, and fitted better for newer riders than the Honda CB1000R, the Honda CB500 seems more likely to make it to US soil, though Honda has never shied away from interesting category-crossover choices in North America.
It seems that the CB 500 will be cheap and released to steal sales from the Ninja 300, Er-6n and f. It will be a bigger brother to the 250 and not a smaller brother to the 600. One may see it as double the 250, and not 5/6ths of the 600.
Thus it will not be a successor to high-revving, high-price bikes like the NC30 and CBR400RR, rather a nice looking, fun, affordable, practical, do-it-all motorcycle. Bikes like the Kawasaki Ninja (ER-6f) 650 or even the Honda NC700X are wonderful, practical machines, but at 7600 and 7500 Euros respectively, they create a large price gap over the 4300 Euros CBR.
A 5-6000 Euros CBR500 could nicely bridge that gap, while being more appealing to young riders than either.

Comment: The styling of the CBR500  resembles to that of the CBR600RR 2003-4. It will be interesting to see if the engine is parallel twin, like the older CB500, or in line four.
With the economies of many developed countries being puzzled gradually and many developing countries eager for a cheap increase in engine capacities, everything makes sense. 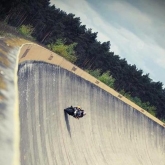