For a brief time earlier today, German accessories maker Wunderlich published these detailed artist renderings of the 2013 BMW R1200GS on its website.
Upgrades like that LED horseshoe, liquid-cooling and radial Brembos have been expected/teased, but did anyone think the bike would veer this close to its predecessor?
The GS is due for its official unveiling at the Intermot show in Cologne this week.

Moto-choice.com had published these photos almost one month ago, at 2012/9/4.

2012/6/10.     The upcoming BMW R1250GS has been spied during testing, showing many upgrades over the current R1200GS.
It’s impossible to overstate the importance to BMW of the new R1250GS. The current R1200GS and Adventure models make up a whopping 33% of all BMW’s sold in the world. Not only is that a large percentage of the bikes sold, 1/3, but they are one of the more costly BMWs on sale so represent a huge and lucrative slice of revenue.

It’s with this in mind that the background to the development of the R1250GS and the decision to make it water-cooled after 30 years of the GS model, comes into sharper focus. The clearest evidence the bike is water-cooled comes from the position of the exhaust port, which is now at the base of the motor. This would be impossible with an air-cooled engine because the exhaust valves would get too hot. With an air-cooled motor they need to be at the front of the motor to get maximum benefit from the airflow.
The single-sided swingarm has changed sides with the exhaust system now running down the right of the bike. The bodywork is familiar in terms of the overall styling but again has been given a complete overhaul. 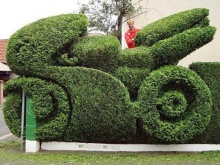