The BMW Motorrad model changes for 2015. The R1200GS gets new extras and the Special model K 1300 S Motorsport is introduced.

BMW R 1200 GS.
With a view to enhanced running smoothness, it will be fitted with a crankshaft with increased gyrating masses as in the R 1200 GS Adventure and R 1200 RT. In addition, the R 1200 GS can also be fitted with the BMW Motorrad Keyless Ride System as an ex-works option. This enables both the steering lock and the fuel filler flap to be locked and unlocked. The motorcycle is started using the starter button as before. With Keyless Ride, the key can always remain in the rider's clothing. The Shift Assistant Pro available as an option ex works allows the rider to shift up without clutch, enabling acceleration virtually without torque interrupt. It also allows downshifting without using the clutch.

BMW R 1200 RT.
The R 1200 RT will be fitted with the BMW Motorrad Keyless Ride System as an ex-works option.

BMW K 1600 GT and GTL.
The two model variants now benefit from Dynamic Traction Control (DTC) as standard for increased safety when accelerating. In addition, the K 1600 GT/ GTL can also be fitted with the BMW Motorrad Keyless Ride System as an ex-works option (already included in the fittings of the K 1600 GTL Exclusive). Other new special equipment features for the K 1600 GT/ GTL include daytime riding light and Hill Start Control for easy hill starts. The K 1600 GT and GTL are now also fitted with the instrument panel of the K 1600 GTL Exclusive featuring new scales and particularly high-end chrome surfaces.


BMW C evolution.
For increased comfort, the innovative electrically powered scooter BMW C evolution can be fitted with a comfort seat (option) as of model year 2015. This is also available as a special accessory for retrofitting. 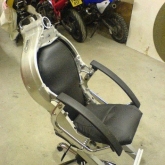