Marc Marquez produced a masterclass in difficult conditions at the Iveco Daily TT Assen to make it eight wins from eight races in 2014, ahead of fellow podium finishers Andrea Dovizioso (Ducati Team) and Dani Pedrosa (Repsol Honda Team) - after an entertaining flag-to-flag contest

In a race which started after a delay due to wet conditions Marquez judged the 26-lap challenge to perfection, running with Dovizioso at the front in the early stages and asserting his authority as the riders changed to dry set-up machines on the seventh lap.

Marquez eventually clinched the win by 6.7s seconds to become the first rider since the great Giacomo Agostini in 1971 to win the first eight premier-class races of the year. Dovizioso stepped onto the rostrum for the second time in 2014, with Pedrosa completing the podium after holding off the pursuing Aleix Espargaro (NGM Forward Racing) for several laps. Espargaro rode well to hold fourth, having started on pole on the ‘Open’ Forward Yamaha.

Valentino Rossi (Movistar Yamaha MotoGP) took fifth having shown great pace in the second half of the race, his problem being a late decision to swap back from slicks to wets at the start. Rossi started from pit lane on wets, therefore, and recovered considerable ground before and after eventually the swap back to slicks. 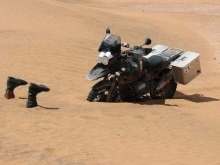