A completely new and very refined electric motorcycle has been spotted on the streets of Seoul, at the shootings of the new Avengers movie. The absence of clutch lever combined with the engine enclosure indicate an electric bike, whilst the brand name on the fuel tank and the white outline of the front brake caliper become an evidence for the manufacturer.
The single, average sized brake rotor at the front indicates a motorcycle that its not really sporty-committed, whilst the riding position is providing some serious doses of alertness for a Harley bike. Will this bike raise a new argument among the Harley-Davidson enthusiasts around the world just like the introduction of a liquid cooled engine back in 2001? Too much speculation these days… 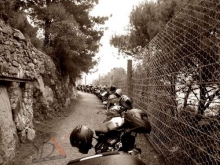