On his penultimate lap of the Phillip Island tyre safety test, Jorge Lorenzo set the best time of the three-day visit with a late 1’29.068 best effort In the absence of injured World Champion Marc Marquez, recovering from a broken leg in Spain, Yamaha Factory Racing’s Lorenzo dominated the Australian test by posting the top time on all three days.

Wednesday’s final day saw a very brief shower and two stoppages due to crashes for Moto2 rider Tito Rabat, but was an otherwise highly productive day for Bridgestone and Dunlop. Although this test was about narrowing down tyre options for the Grand Prix here in October and less significant than other tests for lap times or bike development, Lorenzo will nonetheless be pleased to have gone consistently faster than his rivals – especially after some tyre frustrations at last week’s Sepang workout. Lorenzo also carried out a strong race simulation on the final day, posting a succession of laps in the low to mid 1’30 range. Meanwhile, his fastest time of the test came on last year’s race tyre.

Second on the timesheet overall and on the final day, Dani Pedrosa’s best time of the week was a 1’29.381 whilst his best Wednesday time came in at 1’29.458s. Like his fellow riders at this track, he now heads home to recover before Round 1 in Qatar, having tested for six of the last eight days in total. Third fastest this week was Ducati Team’s Andrea Dovizioso courtesy of his Tuesday best time – 1’29.387. He wrapped up early on Wednesday due to ongoing sickness, lapping just 23 times and finishing fifth on the day. Fourth best overall and third quickest today was Valentino Rossi, ending the test half a second down on his Yamaha team-mate Lorenzo, but feeling more competitive than he was at this stage last year. Rossi tested a new fairing like Lorenzo had yesterday and the Italian stopped short of a full race simulation but was quick on a 13-lap run. Also curtailing a race simulation was Cal Crutchlow who had a front-end issue after 18 laps. The Englishman was fifth best this week but fourth on Wednesday and will be pleased to now be posting similar lap times on the ‘Open’ Ducati to his colleague Dovizioso. The big story of the day for the Moto2 riders was the second of Rabat’s crashes, which resulted in the Spaniard destroying his Marc VDS Racing Team Kalex on the exit of the Southern Loop but fortunately escaping unhurt. On his 600cc machine, he ended the test impressively just 3.1 seconds off Lorenzo’s pace. For the MotoGP™ riders present, their next contact with their bikes will be at the opening round of the season in Qatar from 20th-23rd March, whereas the rest of the premier class grid will carry out a three-day test at Losail from this Friday (7th March) to Sunday (9th March).

Maintaining the top spot he had already held on Monday, when he stated he was far happier with the 2014 rubber, Lorenzo this time reduced his best effort to 1’29.133. This was two and a half tenths of a second quicker than Repsol Honda Team’s Pedrosa, with Ducati Team’s Dovizioso making it three different manufacturers in the top three places while Yamaha’s Valentino Rossi and Ducati’s Cal Crutchlow occupied fourth and fifth positions. However, this test is focused more on the sampling of new tyre constructions and compounds as opposed to rapid lap times. Lorenzo could be seen lapping the track with a black carbon fairing on his Yamaha M1, significantly smaller in size but featuring a larger air intake in order to cope with the typically breezy conditions on an otherwise brilliant day for weather at the coastal venue.

With Australia currently enjoying its summer, track temperatures in the region of 50 degrees Celsius are much higher than they will be for October’s Grand Prix, although this does not prevent Bridgestone from extracting plenty of data regarding tyre durability. Testing will continue on Wednesday, with action on the third and final day of the week taking place between 9:30am and 5:30pm local time (GMT +11).

The former MotoGP World Champion’s best time of 1’29.213 put him top of the pile though lap times and bike development are not the focus this week. The riders and teams are working on tyre durability and have a specific schedule to follow over the 72 hours at the Australian venue.
Monday’s workload included set-up on control tyres and short runs on a selection of six different new tyres, some with new compounds, and others with new construction. Bridgestone aim to narrow down the selection of tyres on Tuesday and Wednesday, with longer runs then being undertaken on the best performing options.

Lorenzo was struggling with the generic 2014 tyre specification at Sepang last week and though the Phillip Island times are distinct due to the nature of this test he will nonetheless be pleased to be leading the way. In second place on the timesheet was Cal Crutchlow, notching up 67 laps for Ducati in the wake of their decision on Friday to go ‘Open’ for 2014. Crutchlow was 0.363s off Lorenzo, but was tellingly four tenths faster than his fifth placed colleague Andrea Dovizioso - who missed the first hours of the test due to an overnight illness.
Valentino Rossi ended the day third, around half a second down on Lorenzo, with Dani Pedrosa in fourth at a 0.75s gap to the top time.
With injured World Champion Marc Marquez missing this test, those five aforementioned riders clocked up a total of 369 between them – providing plenty of data for Bridgestone. 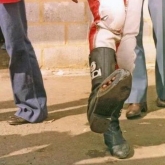