Repeating his dominance of the first two days, Marc Marquez concluded the first Sepang test of the 2014 preseason ahead of his rivals, thanks to a rapid early best time. The MotoGP™ World Champion Marquez wasted no time on the final test day at the Malaysian venue, laying down a superb 1’59.533 marker in the cooler temperatures of the morning.

His pace-setting lap was marginally quicker than the previous best Sepang test time of 1'59.607, registered by Casey Stoner in 2012. Marquez later produced a strong performance in a race simulation with 15 consecutive laps under the 2’01 mark.

Nine-times World Champion Valentino Rossi set his own personal best Sepang test time of 1’59.727, whilst Jorge Lorenzo clocked the third best time of the day with a notably quick 1’59.866 effort on just his second lap. Like Marquez, both Yamaha Factory riders later produced longer runs as they too worked on tyre durability and fuel consumption in preparation for their battles this year with the incoming ‘Open’ class machines – which will have a 24 litre fuel limit compared to the 20 litre capacity of the Factory entries.

Showing the potential of the new ‘Open’ bikes was the consistently impressive Aleix Espargaro on the FTR Yamaha of NGM Mobile Forward Racing, with his 1’59.998 best time coming on the second of 43 laps. The older Espargaro brother’s pace is one of the talking points of the week and he was able to lap nearly two seconds quicker than his teammate Colin Edwards who concluded Thursday’s session 14th.

LCR Honda’s Stefan Bradl (+0.579) was close behind Forward Racing’s Espargaro in fifth, despite falling at turn one early on Thursday. That was of course the corner where he fractured his ankle in October’s Grand Prix, but on this occasion he was unhurt and immediately remounted.

Repsol Honda’s Dani Pedrosa made a slower start and also had an off track excursion early in the morning, but later moved towards the business end of the timesheet, going up to sixth place with a 2’00.223 lap in the afternoon.

Suzuki Test Team rider Randy de Puniet will also continue his work throughout the year in testing as he looks to close a three second gap to the front with the evolving Suzuki machine. He was 17th on the timesheet. The premier class riders will be back in action at the Sepang International Circuit for further testing from 26th to 28th February.

With conditions just as good as they had been on Tuesday, it was Marquez’s team-mate Dani Pedrosa who led the way for much of the first half of the day. The World Champion then smashed through the two-minute barrier shortly before his lunch break, after which there were substantially less changes in lap times. It remains to be seen as to whether Marquez can better Casey Stoner’s 2012 pre-season time of 1’59.607.

With Repsol Honda first and second, Stefan Bradl was third for LCR Honda MotoGP (three thousandths down on Pedrosa) with Valentino Rossi fourth for Yamaha Factory Racing. Aleix Espargaro again displayed the promise of the new Open FTR-Yamaha combination, as his Forward machine was barely two tenths down on the nearest Factory Honda, with Rossi’s team-mate Jorge Lorenzo sixth; the former double title winner was attempting to improve handling issues, encountered on Day 1 as a result of setup changes made in a bid to improve fuel consumption, as for 2014 the Factory Option bikes are limited by a further litre of fuel to just 20 across a race distance.

Bradley Smith spearheaded the Monster Yamaha Tech3 charge, with Pramac Racing’s Andrea Iannone in eighth position; on the leading Ducati, the Italian was some seven tenths of a second quicker than he had been on Tuesday. Alvaro Bautista was ninth for GO&FUN Honda Gresini, but his day was not without its problems; at 11:30, the Spaniard suffered a technical problem and thus took a shortcut back to the pit lane.

The top ten was completed by Smith’s team-mate Pol Espargaro, while brother Aleix’s team-mate Colin Edwards was the only rider to not improve his lap time today, but his best effort from Day 1 still leaves the American 15th on the combined timesheet. Thursday will mark the third and final day of this week’s Sepang Official MotoGP Test, with identical running times of 10am-6pm local time (GMT +8).

This is the hand of Marquez

Marquez posted 2’00.286, half a second up on Rossi as both the Italian and Marquez’s team-mate Dani Pedrosa jumped ahead of Jorge Lorenzo’s Yamaha in the final minutes of the day. The top six was completed by GO&FUN Honda Gresini’s Alvaro Bautista and LCR Honda MotoGP’s Stefan Bradl.

Much attention was on Ducati Team, with talk continuing to circulate that the outfit could elect to race under the new Open regulations this year. Testing continues at the Sepang International Circuit over the next two days, again running between 10am and 6pm local time (GMT +8). 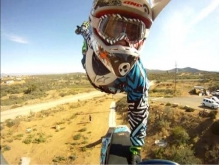