The bike provided for the review had clocked 1556 Km. An improvement to the performance described should be expected.
Because of wet weather especially during the period of the test, the pictures of the bike might not be of the highest quality.

Engine: The air cooled engine of 124.6 c.c. which is fed via a carburetor, provides adequate performance to the bike. In terms of performance it is not greatly inferior compared to that of the more expensive bikes in the category. Top power output 10bhp/8000rpm and 1.08Kgm /4000 rpm torque, nominal values.

First and second gear are relatively short in terms of gearing, which together with the torque produced from the engine, permits starting with second gear engaged. However having engaged the first gear, start is really easy even when carrying a pillion, or riding uphill roads, first or second gear engaged.
Gear box provides adequate travel of foot motion however the procedure of changing gears could be less noisy. Gearbox is sequential, semi-automatic.

As a matter of fact Joy 125 R cannot really be compared with the larger capacity – more powerful bikes of the category e.g. the ZX 130. However on normal riding conditions, an average rider will hardly ever need higher engine power for commuting.
If engine is pushed to the limits, fuel consumption is considerably increased. However due to the small 4.8 litres fuel reservoir, even a small portion of gasoline gives wings to the fuel indicator.

Riding position: The seat height is low. Even short riders will be satisfied, if they will use the front part of the seat. The width of the seat is increased, providing riding comfort.
The weight of the bike is light, centre of gravity is low. Rider is placed mostly on the bike, just slightly in, riding position is neutral.
The brand of the tyres fitted is IRC, dimensions are 2.5/17 front and 2.75/17 rear.

On the road: The firmness of the front suspension is average, just slightly soft. The rear suspension which is not adjustable is somewhat softer than the front, firmness lies between soft and average.
Steering lock is really satisfying, however not top class.
On  town rides it’s a very effective bike, even in congested traffic. It is a really easy bike to overcome traffic obstacles then.

This bike provides a firm sensation. Road imperfections are absorbed well, however its clear that its not top class at this point.
Great imperfections cannot be absorbed. From the other hand feedback to the rider while cornering, is good.

On B-roads  the Joy is  very agile, however it’s the bike's stability that stands out. Road imperfections are absorbed nicely also. The operation of the forks is better than that of the suspension at the rear. As a result a slight suspension insufficiency will be noticed between Joy and more expensive bikes of the category, say the ZX-130.

The combination of the adequate performance provided by the engine and the firm sensation results in a joyful mood on B-roads as feedback to the rider is really satisfying.

In case of a dirt road ride, firm sensation is dominant once more. Comfort to the rider is not sacrificed though.

Comments: Under the seat there is a tiny, almost useless storage space. There is a  choke for the engine  due to the carburetor used. The design of the mirrors is nice.
The side stand is fitted as a standard. As the bike is not equipped with a valve turning the engine off when extended, there is a spring for the side stand. As a result, the use of the side stand is not really practical as it is difficult to keep it extended when parking the moped. There is a gear engaged display on the dash.

Conclusively there is not any particular point that Joy R is greatly inferior to the most expensive cubs of the market. It is however a cheaper and more basic commuter. Whether the design is conservative or not, its a subjective point of view.

Price : 1695 Euro
+ In the lower price cubs category, engine output. + Firm sensation + Price/Value ratio
- Difficult to use side stand - The storage space is tiny.
Τhere were no specifications found at any official Kawasaki site visited for this bike. 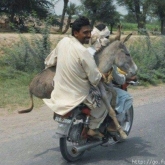