Engine: The single cylinder air cooled engine of 644 c.c., is fed via a carburetor. There is no rpm meter on the display, so the engine output performance cannot really be evaluated throughout the whole power band. It’s a really smooth engine, providing great torque, 5,3, Nm at 4500 rpm nominal value, vibrations free. Αt the top of the range, the power delivered is indifferent, 37 nominal bhp at 5750 rpm.
The Fmx reaches instantly the 100 Km/h speed, the 130 Km/h easily, from 130 Km/h some vibrations may be felt, up to the 160 Km/h indicated top speed, which will require quite a lot of time. The gear box is splendid while the clutch is quite light.
The owner may install some aftermarket items which will boost mostly the single cylinder torque, for a great power bhp gain, a lot of money is needed as the primitive design of this engine is really old.

Riding position: Because it is a supermotard, the bike is thin shaped. The rider is positioned rather over the bike, the riding position is slightly aggressive. The rider’s seat is rather tall and hard. Lower height novice riders would like more confidence whenever they will need to step a foot on the ground.
On the road: Suspension is relatively firm. The Fmx on urban rides is a stylish, nice bike to ride, its almost neutral tending to aggressive. The really great steering lock will be very helpful in town rides. Due to the height of the bike filtering is very easy. Agility is adequate for the category standards, that is generally considered to be superb.
Suspension provides precise feedback, handling on B roads is friendly, neutral , confidence inspiring, tempting rider to enjoy riding. The engine and tyres will set the limits. On fast B roads, towards highways, engine performance becomes gradually a handicap, as frame and suspension can easily handle the power output.
On go kart track the bike feels underpowered and heavy, there is lack of  suspension adjustments except from rear spring preload. Brakes are user friendly as well as powerful, the front one could provide better feedback.

Comments: The Fmx is tedious for the pillion, at anything longer than a short ride. The front light is weak. The high tag price together with the tendency of the manufacturer for politically correct bikes, which resulted in this underpowered engine, didn’t make the sales that Honda expected.
The invention of the term funmoto instead of  the use of supermoto term, didn't really persuade consumers. 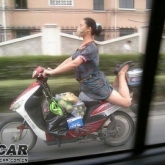