Engine: Exceptional torque from the low end, 1500 rpm, e.g. the sixth gear may be engaged at 40 Km/h. Very linear indeed, almost electric, without any hiccups or bursts at the whole power range. Powerful at the top, up to the rev limiter at 10700 rpm, 96.5 nominal bhp.
This number is not really impressive, however together with the mighty torque, the CBF is really fast without making fuss about it. It will satisfy novice and expert riders, reaching easily the 200 Km/h figure, slower up to the top speed of 232 Km/h.
Because of the engine’s 1000 c.c., it gets hot easily in town rides.

Riding position: The seat may be adjusted at three variable positions, applying to the different rider’s heights. The riding attitude will be changed from touring at the lowest position, placing the rider rather in the bike, to sporty at the highest one, placing the rider rather on the bike.
As a result the riding position is really comfortable for every rider. The width of the seat is average, so every rider may step a firm foot on the ground. Suspension is towards ride than handling, centre of gravity is at average height. However when standing still, the bike has a relatively heavy feeling. The steering radius could be slightly better although it’s adequate for 80% of the cases.
On the road :On urban rides, the relatively low seat together with the relatively high handlebar make city rides really comfortable, with great control. The limited bike width aids filtering, agility is good for the category standards, although there is a sensation of a big heavy bike. Suspension is comfortable absorbing a lot of road imperfections.
On low friction B roads riding is comfortable, handling as neutral as it can ever be on a bike, very steady indeed, absorbing imperfections, thus rider may ride in calmness. Agility is greater than what a rider would expect from this kind of motorcycle.
When the pace gets fast, these advantages become a disadvantage , so in the very fast mode, slow steering geometry is evident. The bike will not change easily direction, while the comfortable riding position makes the front discharged. In the very fast pace the front will gradually understeer, asking rider to apply more weight at the front, for better control. The rear wheel gradually oversteers then at the opening of the throttle. At the fast pace in slow bends, due to the riding position and the slow steering geometry, the CBF may be ridden with the rider sitting upright on the saddle, while the bike changes direction underneath him.
On high friction B roads the CBF is superb for an average pace, being greatly neutral for a touring bike providing high riding quality. In the fast pace then, the front needs some of the rider’s weight while slow steering geometry , soft suspension and bike inertia will set the riding limits.
On  the highway, the screen provides exceptional air protection for speed up to 200 Km/h.
On soil roads the bike is acceptable. Due to the high handlebar, the low seat, decent control is provided for the bike standards. Some caution is needed as it’s a heavy bike, tyres not really suitable and a minor slide can be dangerous.
C-ABS brakes are user friendly and need adequate rider pressure to perform.

Comments: Of course this bike is not designed for soil road rides. However it’s a very good general purpose bike and this riding exception , certifies the rule. Making some compromises at the limits, the owner of the CBF combines a variety of uses without costing him a fortune. 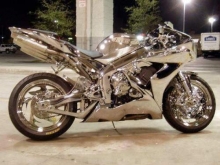