Actually the power output is released quite gradually. Hence, the acceleration is linear up to the rev limiter at 9300 rpm indicated figure. The top speed is affected greatly by any road incline or adverse wind. Thus the top speed varies between 92km/h (57 mph) at 7000 rpm, up to 105 km/h (65 mph), indicated figures.

The engine derives from the Honda Wave 125 equipped with an ordinary clutch. The reliability of the engine has been proved since it has been mounted to more than 930000 bikes. However during the test, sometimes  it was difficult to find neutral. An indicative average fuel consumption figure is 2.5 l/100 km (113 mpg Imperial).

Riding position: The saddle is very low at 765 mm (30.11 in), it is suitable to short and novice riders willing to step confidently their feet on the road. The weight of the MSX is very low, that is 101.7 kg (224.1 lbs) claimed figures kerb. The dimensions of the bike are small, it could be perceived that it is a 2/3 scale model of a normal 250 c.c. adventure bike. Its only the handlebar that  is wide and certainly there is a reason to that, which is the great lever provided to directional changes. The small dimensions are indicated by the short (1200 mm - 47.24 in) wheelbase while the other steering geometry numbers are 25 ˚ rake and 81 mm (3.2 in) trial.

The rider is placed over the MSX, the riding position inspires a mixture of alertness and aggressiveness! This could be due to the narrow saddle which inclines to the front and the wide handlebar. Conclusively the MSX is small enough to be supremely manageable yet also has a fully-fledged feel thanks to some standard sized motorcycle parts.

The pillion is seated slightly higher than the rider, the space on the saddle is reasonable for such a small bike, the knees form a sharp angle. The pillion may support her/his weight by the plate support which is quite to the rear, while the pillion’s hands are exposed to road dirt.

On the road: An inverted 31 mm fork is equipped at the front while there is no linkage at the shock. The suspensions are very soft. Alloy wheels are equipped. The OE tyres are Vee Rubber with dimensions 120/70-12 and 130/70-12 front and rear. They are considered an average choice concerning handling especially on low friction factor roads.

In town the MSX is pure fun. The riding position initiates alertness which together with the sporty engine sound tempt the rider for nimble rides. The combination of the small wheels together with the wide handlebar results to superb agility which makes directional changes so easy.

On downtown rides the MSX becomes a very capable little bike. The small dimensions and weight combined with the supreme agility make commuting an extremely easy type of ride. Steering lock is exceptional, thus any maneuvers required on a traffic jam will not be an issue. The height of the handlebar and the mirrors is about the same with car and SUV mirrors respectively, hence filtering is good, since the handlebar is wide. The mirrors provide a superb view although the rider has to look quite sideways from the road to get the picture.

However there could be some complains referring to the comfort provided by the MSX. Actually the small wheels cannot absorb the road imperfections which will be felt by the rider. This could be an issue to riders who are not young anymore, over poor road surfaces. The second issue is again due to the small wheels, in the case that rider wants to climb on a pavement. Even normal sidewalks look quite big compared to that tiny front wheel, which will require any enduro technique  seen by a novice rider to overcome the “beast”!

Conclusively if rider wants to have fun on urban rides, the MSX is one of the very best proposals despite the weak engine. The rides get special, providing a nice mood, exactly like that pleasant and seemingly innocent face of the MSX.

On B-roads again the sporty nature of the MSX becomes tempting to the rider. The aggressive riding position, the agility provided and the sporty sound of the engine feel nice, justifying the term playbike for the MSX.

At the fast pace the limits will initially be set by the engine performance. An air cooled 125 c.c. engine will be striving to make things interesting. It’s a good thing though that downhill roads do exist! Despite the small wheels and wheelbase, the MSX is quite stable inspiring confidence to the rider. Thus on downhill roads the MSX becomes again a playbike! However if rider wants to corner the MSX hard, this sort of rubber combined with the small dimensions of the wheels result to diminished feedback to the rider, especially on slippery road surfaces.

On the open road the MSX is not adequate. It could be used on very short rides since except from the weak engine performance, the riding position becomes tiring after a while.

On dirt roads the MSX is a very joyful and comfortable bike on slow rides. Again the small wheels become a disadvantage if the road is not flat, since they are affected by any obstacles, especially in the case of longitudinal ones.

A single 220 mm rotor with a two piston caliper is equipped at the front and a 190 mm rotor with a single pot caliper are equipped. The front brake provides good stopping power, initial bite and feedback to the rider. The MSX will perform endos.   However the diving of the front end is substantial at such a powerful braking, resulting to decreased feedback to the rider. The rear brake is also good given the character of the MSX.

Comments: Rider has to hold the fuel cap every time that the bike is to be refueled, at the end though a qualitative “click” sounds when the cap is pressed downwards on the bike. The headlamp is a projector while the tail light is LED. The LCD screen provides indications of the speed, two trip meters, fuel level and clock. If there is an option of a rack and top box the MSX will become a great alternative to the 125 c.c. scooters. Naturally it would be much more entertaining and involving than any scooter. Τhe MSX is manufactured in Thailand, build quality is very good.

The indicators are lit constantly which reminds of bikes complying with Japanese specifications. Combining the yellow color of the bike tested, the orange color from the indicators and the instrument, a genuine orange-yellow scenery is set every night, which could embarrass many Ktm bikes! That sounds like blasphemy!
Τhe MSX could be favored by younger or older riders. The rider can feel it on the road by the way that people stare on the bike, while it triggers many brief talks at traffic lights with nearby riders. The model name MSX means Mini Street X-treme while in the US it is available as Grom which means young surfer.

Although Honda has a great tradition in small bikes, (Ape, Monkey, Gorilla, Dax, Chally), the MSX which was introduced in 2013 is quite larger than those, while the design and the character of the bike are influenced by the Kawasaki D-Tracker 125 - KSR 110 or even the Yamaha TDR 50-80 which had preceded. 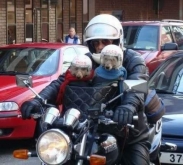