Engine: The single cylinder liquid cooled 330 c.c. engine delivers 33.3 bhp/8250 rpm and 3.3 kgm/6250 rpm (23.9 ft lbs) torque, claimed figures.
There are two mappings which may be selected by a switch on the handlebar, normal and eco. The latter is indicated on the display and according to the manufacturer it provides a decrease in fuel consumption by 5%.

The throttle has to be off in order to start the engine which sounds discreetly sporty whenever the throttle is applied, at least to a rider wearing her/his helmet. A moderate vibration is felt at idle. It’s the same engine powering the Piaggio Beverly Sport Touring 350.
The performance is about the same despite the weight difference between the two scooters. Thus the full throttle acceleration is very good, the scooter reaches the speed of 60 km/h (37 mi) fast, the speed of 100 km/h (62 mi) moderately and the top speed of 155 (96 mi) slowly.
Actually the difference between the two engine operation modes is negligible, considering either acceleration or the top speed issue. Rider will rather select the eco mode, feeling happy that fuel consumption is decreased without sacrificing any performance.

In case of a downhill road the top speed is electronically limited at 160 km/h (99.5 mi) indicated figure. The ABS and the Traction Control (ASR) which, the latter, may be deactivated derive from the Beverly Sport Touring 350 ABS although the operation of the ASR is considerably smoother in the case of the X10. The intervals for oil and filter changes are 10000 km, (6200 mi), while the engine should be serviced every 20000 km, ( 12400 mi). An indicative average fuel consumption figure is 4.4 l/100 km, (64 mpg Imperial).

Riding position: The saddle is low, (760 mm – 29.9 in.) although it’s wide, thus it will be adequate to average stature riders or higher. Rider feels mostly in than on the scooter. The riding position is absolutely normal for the scooters’ standards.
The pillion is seated quite higher and towards the rear of the scooter than the rider, the saddle for the pillion is really roomy, the firmness of the seat is average. The knees form a natural angle, the handgrips are very convenient. In other words the seat for the pillion could meet a throne’s specifications. There is marginally something to be improved, the support for the pillion’s back is not standard equipment.

On the road: A 35 mm is equipped at the front and twin shocks at the rear which provide the sole suspension adjustment, that is the spring preload in four increments. The default setting for the preload of the shocks is the softest level. The suspension travel is 125 mm at the front and 120 mm at the rear.
OE tires are the Michelin Power Pure, which is the world’s first dual compound tire. Its a superb choice, improving the handling of the scooter.

In town the Χ10 behaves like maxi-scooter, thus it will provide any services required as long as traffic is not congested. Agility is increased, enhancing usability.

On downtown rides as the traffic gradually builds up, the dimensions of the X10 require some caution by the rider especially maneuvering the scooter around cars. Fortunately steering lock is very good and the rider will not need a lot of space during these maneuvers. The mirrors are spaced relatively far from the rider’s field of view.
Filtering requires some caution and quite a lot of practice before rider can exploit the potential of the X10 without stress. The reason for that is the increased width of the scooter and the height of the handlebar and the mirrors, which is the same with cars’ and SUVs’ mirrors respectively. Thus it will filter like any mega-scooter of the market, although the engine capacity of the X10 350 doesn’t typically belong to the maxi-scooter category. However the weight of the scooter which is well-hidden, is obviously an advantage compared to the standards of the category.
The damping of road imperfections is really good. Probably  the suspensions cannot convert any bumpy road to a flat surface, however they are qualitative and the comfort provided to the rider by the Χ10 may be compared only with the scooters’ very best, no matter the price.

On B-roads the X10 provides a mixture of stability and agility. Actually while rider may feel that the wheelbase is long, agility is still very good. Thus the X10 combines the best from both worlds. Comfort to the rider and pillion is great.
At a faster pace, the X10 feels lighter although there is adequate grip even on slippery roads, which is obviously due to the tires.

At the fast pace the X10 makes it clear that this is not a sporty scooter. Thus rider should not expect the handling of a Yamaha Τ-max or a Bmw C600 Sport. Except that the X10 feels light, feedback to the rider is diminished and the scooter feels edgy at a speed higher than 130 km/h (81 mi) which becomes a slow weave.
This does not result to a riding problem, simply the rider feels that the scooter is close to its limits and the throttle has to be closed a bit. If this occurs, the calmness between the rider and the scooter is again restored. Eventually a very distinctive differentiation can be noticed between the X10 and the Beverly 350 ie Sport Touring concerning the handling.

On the highway the Χ10 provides comfortable journeys as long as the travelling speed is somewhat greater than 100 km/h (62 mi). The saddle provides decent back support from the lumbar cushion and the two transparent spoilers deflect the air away from the rider’s feet. Rider may stretch her/his legs to the front on the legshield. The riding position is very comfortable.
However at a higher speed, there will some compromises asked. Initially air protection is average given the scooter’s character. Thus the rider has to incline considerably to the front in order to get protected from the elements at a speed higher than 120 km/h (75 mi). If she/he inclines slightly to the front, the air flux is felt on the helmet and shoulders. From the other hand, if the highway surface is not of high quality, the scooter feels light again, stability is decreased a lot at a speed higher than 130 km/h (81 mi) and the scooter feels edgy even on the straights at any speed higher than 140 km/h (87 mi).
These two parameters, (air protection and stability) result to a travelling speed of 120-130 km/h (75-81 mi). Thus the Beverly 350 ie Sport Touring gets another riding advantage over the X10, or stated otherwise, the two models are quite different in terms of riding.

It would be nice if the 500 c.c. X10 could be ridden to spot if the bigger engine and the design differences are adequate for faster journeys or the bigger scooter will preserve about the same speed in a more comfortable way. The two versions of 350 and 500 c.c. share the same chassis, although the 500 c.c. variant gets a larger 41 mm fork, a single shock with a linkage at the rear which is adjusted electronically for spring preload. The wheelbase at the 500 c.c. X10 is marginally longer.
At the specific scooter tested which was a 2012 model, at a speed greater than 140 km/h (87 mi) the two brown covers of the storage compartments right and left at the legshield, were trembling a lot buffeted by air, which did not coincide with the scooter’s qualitative nature. This was resolved at the latest assemblages, equipping a harder spring at the rebound of the closing mechanism on these covers.

In case that the Χ10 has to be ridden ...on dirt roads, the comfort provided is still a great advantage. However the scooter doesn’t feel at home on this ground, feedback to the rider is diminished, while the ASR is flashing like going bananas!

The scooter is equipped with a non-deactivated ABS. The brakes are combined, there are twin 280 mm rotors at the front and a 240 mm rotor at the rear, two pots calipers are equipped front and rear. Since the brakes are combined, applying the front brake only one pot on every front caliper is pressed. Applying the rear brake though, the two pots at the rear together with one piston of every front caliper are actuated.
On the road applying the brakes separately, the front brakes provide moderate initial bite, feedback to the rider and power. The rear brake provides good initial bite, feedback to the rider and power, while since it is combined with the front, the front end is diving also.
This actually means that rider will be happy applying only the rear brake which will be adequate for 80% of braking instances, while the front brake will be necessary only at the remaining 20% of the braking cases. This means that applying the front together with the rear brake it will be necessary only in emergency braking.

There are many storage spaces. Under the seat two full face helmets may be accommodated together with a textile motorcycle jacket at the 52   l space provided. At the photos shown a large full face helmet may be seen in two places.
At the 500 c.c. variant the storage space is smaller and according to Piaggio its adequate for a full face and a jet helmet.
At the central storage space of the legshield, which may be locked, two winter gloves may be accommodated, there is a 12 V socket.
At the left compartment of the legshield one pair of winter gloves can be stored, while there is a USB socket.
The two side compartments of the legshield cannot be locked, the right one is adequate for a pair of summer gloves.

Pressing the Mode button, rider gathers information about fuel consumption, battery charge, top and average speed and external temperature. Placing the scooter on the centre stand is very easy, there is an excellent lever there formed. Thus usability is increased even in the case of female riders. From the other hand its very difficult to check the pressure of the tires, as the valves require specific placement of the air nozzle. The kick stand when it is deployed, activates the handbrake. It is one of these moments, when someone is wondering why didn’t anyone think of it earlier on!

The build quality is superb. The pale blue and white colors on the instruments are also qualitative. There are Led daytime running lights at the front and Led taillights, which resemble to car rear lights. The switches on the handlebar are illuminated. The optional equipment includes small and large top cases, the Piaggio Multimedia Platform which equips Bluetooth technology in order to connect rider’s smartphone with the X10 transforming the phone to an on-board computer, a central tunnel bag, a gel seat and a pillion’s back support. Unfortunately there are no heated grips or handguards.
In terms of styling the white scooter is equipped with a brown saddle and covers on the legshield, while the grey scooters feature a black saddle and covers. The wave styled pattern is a nice perception as seen from the sides of the scooter. 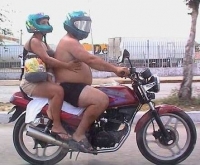