The engine response is very linear and user friendly. However because the bike is not equipped with an rpm meter, the performance throughout the rpm spectrum cannot be evaluated correctly on the road. The engine power is ordinary for the 250 c.c. category standards.
The top speed is 135 km/h (84 mph) indicated figure and it is greatly affected by potential road incline. Due to the superb fuelling of the injection, revving the engine hard form idle doesn’t result to hesitation or stalling at traffic lights.

Riding position: The height of the saddle is increased, 875 mm (34.45 in). Thus short riders will not step a confident foot on the ground. Riding position is a typical for an adventure bike. Rider is placed mostly over the bike.
The pillion is seated at the same level with rider, the saddle for the pillion is soft and long although rather narrow. Pillion’s knees form a quite sharp angle while the pillion has to hold her/himself from the tail of the bike as there are no handgrips. In other words the pillion will not be satisfied on long rides.

The bike is narrow, although the handlebar and mirrors are wide as it should be expected. The dimensions of the CRF are average for the standards of the category. The bike feels comparatively light 144 kg (317.5 lbs) nominal kerb weight.

On the road: The frame is made of steel, the swingarm is aluminum. A 43 mm Showa inverted fork is equipped at the front, fork travel is 250 mm (9.84 in). The Showa shock is provided with a Pro Link linkage, shock travel is 240 mm (9.45 in.). The suspensions are soft. The spring preload is adjustable at the shock.

OE tires are IRC Trails GP with dimensions 3.00-21 at the front and 120/80-18 at the rear. There is a huge tire range if rider wishes to have better grip or enhance the on-road riding.

In town the CRF is a user friendly and neutral bike which will satisfy every rider. The engine provides adequate torque given the engine capacity. The bike combines superbly comfort with robustness, stability with agility. It is certainly a different bike to commute on, concerning styling and actual riding, with respect to the sea of scooters or the numerous street bikes on the urban streets.

On downtown rides the CRF feels like the proper bike to get the job done, once more. Steering lock is excellent, thus maneuvering becomes really easy for the rider.
Comfort over street imperfections is quite better than that of street bikes and substantially improved compared to ordinary scooters. As it should be expected, the damping of the shock is not as good as the damping from the fork, although given the price category, this sort of comfort to the rider is top class.
Filtering on the CRF however could be an issue sometimes. Between cars there isn’t any problem. Between SUV s though, either the handlebar or the mirrors of the bike are at the same height with the SUV mirrors, which requires some caution by the rider.

On B - roads the CRF combines in a unique way stability with agility (wheelbase 1445 mm - 56.89 in. rake 27,6° and trail 113 mm.- 4.45 in). Thus riding the CRF resembles to that of a bigger bike, not really an ordinary 250 cc  on/off motorcycle. Additionally the combination of robustness and comfort to the rider makes the CRF proud for the riding quality provided at this bike category.

At the fast pace the CRF is –initially- a capable bike, rider will manage some steep cornering angles. However when things become serious, on average friction factor roads, the bike feels quite light, while feedback to the rider is also moderated.
If rider wishes for better handling, the tires should be replaced with more on-road ones and a smarter compound. Concerning the first option, the off-road riding will slightly deteriorate. On high friction factor streets the engine feels underpowered while the suspensions feel soft at a pace like this.

On the highway the CRF will be adequate for some short rides. Due to the small engine capacity and the upright riding position, travelling speed is between 110-120 km/h (68-75 mph). Air protection is negligible although at this kind of speed its not an issue.
If rider wishes for some highway use, the option of the CBR 250R is always valid. The front fender starts vibrating from the speed of 120 km/h (75 mph) and more vividly on downhill roads under full throttle at the speed of 140 km/h (87 mph), where some light weave may also be felt.

On dirt roads the CRF is neutral and user friendly, while the robust and integrated riding reminds of a bigger motorcycle. The wide handlebar helps the bike to change direction swiftly, while stability is enhanced. Comfort to the rider is very good and the brakes are an additional advantage on this terrene. A plastic underbelly cover provides protection to the carter from stones.

A 256 mm rotor is equipped at the front together with a two piston caliper and a 220 mm rotor at the rear together with a single pot caliper. The rotors tend to petal type. The front brake provides relatively good power, feedback to the rider and initial bite, while the rear brake provides good power, feedback and initial bite. Thus the front brake is quite user friendly although the diving of the front end is substantial on emergency braking which doesn’t allow the rider to fully exploit the potential from the front brake. For an on-off bike these brakes are very good, riders whishing to brake harder on tarmac, should think of the CBR 250R option once more.

Model history/versions/reliability/build quality: It was 40 years ago that the XL250 was introduced. Honda continued later on, civilizing the off-road oriented XRs or introducing the NX – (AX for Japan). Roughly in 2004 Honda decided to give priority to scooters, or to say the most street motorcycles, discontinuing the 250 c.c. adventure bikes from the range. Well, that was the case up to the advent of the CRF-L. This bike was introduced in 2012.

Although the engine is derived from the CBR250R, the frame is a new one. A supermoto variant could be introduced in the future, featuring 17 inch wheels. Thailand is the manufacturing country. The reliability of the engine is certain since it has been evaluated on the CBR. The build quality and the finish are very good.

Comments: The lights are very good, in the past the lights of bikes like this were almost … decorative parts. The white light on the instrument is qualitative. The sound of the horn is ridiculous. The cover at the left side of the tail may be opened with the engine key, providing the space for tools and the paperwork.
There are also 4 hooks at the tail, where objects up the 5 kg (11 lbs) may be tied, although there is no rack provided. The styling of the bike refers directly to the racing CRF R. The chromed fuel cap looks too much of a part for a dual purpose bike.

Τhe CRF is a bike fulfilling Honda’s wish to provide a universal  everyday motorcycle which will be adequate for a weekend ride on dirt roads. The bike set-up reminds of a bigger motorcycle since agility is superbly combined with stability. Thus it will not be a surprise if a version with a bigger engine comes to life in the future. If only some of the XR character (or - should be dreaming by now - some of that early XR sound) could be released from that engine…

The tag price is average for the standards of the category since it is cheaper than the Kawasaki KLX 250 although it is more expensive than the supermoto Ktm DUKE 200.

+ Superb combination of agility and stability.

- Soft suspensions at the fast pace 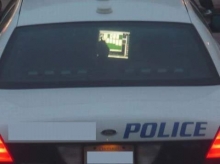