Riding position: Τhe height of the saddle is normal, 785 mm (30.91 in), the width of the seat is large though, making it a little high to short riders. Rider is placed in and over the scooter, riding position is upright, rider’s hands are spread wide on the handlebar. The pillion is seated a little higher than the rider, the body of the pillion feels relaxed on the Fuoco.

The dimensions of the Fuoco are normal for the standards of the three wheelers, that is an ordinary length and height if it is to be compared with a motorbike. The width of the Fuoco is increased though, especially at the area of the legshield and especially in front of the rider’s feet. The weight of the scooter is large, 244 nominal kg empty (538 lbs) and it is felt like that. In some countries the weight is mentioned differently, between 238 and 253 nominal kg dry, (525 to 558 lbs).

On the road: Checking the suspension stiffness static, the front suspension is uncompressible, which is common on three wheelers due to their front end. The rear suspension equips two shocks adjustable to spring preload.  Suspension travel is 85 mm at the front and 110 mm at the rear (3.35 – 4.33 in respectively).

OE tires are Michelin Pilot Sport SC with dimensions 120/70-12 at the front and 150/70-14 at the rear. They are considered a good choice, although they are not the best option in terms of handling.

At the right handlebar there is a switch for the electric-hydraulic suspension block system. If the switch is turned to the left, suspension is blocked, the scooter cannot be leaned to either side. If the switch is moved to the right, the scooter suspension is unblocked, the Fuoco may be ridden normally. This feature is useful in case of parking, on brief stops, at traffic lights if rider wishes to, etc.. On cases like these, rider may not step a foot on the ground.

Applying the throttle, this system is automatically unblocked. Rider will need some time to adapt, as the scooter has to be stopped vertically. If it is stopped and blocked leaning on one side, at the off it will immediately start cornering, which is confusing to the rider.

A handbrake is also available at the legshield, which operates like a car’s handbrake. It is activated when pulled upwards. Its useful if the Fuoco has to be parked uphill or downhill. In case that both the handbrake and the electric-hydraulic suspension block system are applied, opening the throttle, the suspension blocking system is released, while the handbrake is still applied.

In town the Fuoco is quite good on everyday rides and as long as traffic is not congested. It’s a neutral and agile three wheeler, very satisfying to the riders who know what to expect form a scooter of this kind.
It should be stated here that changing direction it doesn’t feel stiff like the Aeon/Quadro, it is quite agile like the Piaggio mp3s at this aspect. Although the operation of the engine is smooth, the oomph provided is instant and powerful any given instant.

On downtown rides the Fuoco is satisfying as long as traffic conditions are close to normal. On congested streets the weight and the width of the bike do not favor maneuvering.
Steering lock is average for the standards of the three-wheelers category, that is marginally greater than the smaller mp3s or the Yourban’s and increased compared to that of scooters’.

Filtering is moderate for a downtown oriented bike. The height of the handlebar and mirrors is the same with that of cars’ and SUVs’ mirrors respectively and the width of this scooter is considerable. Thus, its not as convenient on downtown traffic compared to e.g. normal 300 c.c. scooters on traffic jams.
Comfort to the rider is relatively good, which is normal to this category, that means slightly better than an average 16 inch wheel scooter.

On B-roads stability is the key riding feature. Agility is inferior to that. Even at the fast pace, feedback to the rider is relatively good, while riding confidence is still really good, which is normal for this bike category. The engine output power feels rather small at such a pace.

On the highway, the Fuoco is very good providing great stability and confidence. However while the engine has the capacity and the power to preserve a decent travelling speed, air protection is average as rider gets the full air pressure at the height of the diaphragm and higher than that.

Comments: Fuoco in Italian means fire. Build quality is very good, the finish is quite good.
Whenever its necessary to support the Fuoco on the centre stand, it is much easier than expected. Under the seat there is adequate space for a full face helmet and e.g. a motorcycle jacket.

A 42 l top case and an adjustable in two positions screen are optional equipment. However their price is considerable, € 260 € for the first and € 332 for the latter together with the required supports. At least a 12V plug and a rack are standard equipment.

The angry looking styling of the Fuoco at the front combined with some off-road touches are an advantage for this scooter. The Group Piaggio named the Gilera Fuoco as  Paggio mp3 500 in USA, where the name Gilera is practically unknown.

+Safety - confidence to the rider

Thanks to the motorcycle shop Baxevanis - Honda, http://www.baxevanismoto.com/ , for the provision of the test bike. 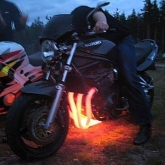