The difference between the Vision 110 and this variant is that the 14” front wheel has been replaced with a 16” one, aiming to rider’s comfort on roads featuring imperfections. The rear wheel is still a 14” one.

Acceleration is decreased above 60 Km/h (37 mph). On minor uphill roads, the speed of 80-90 Km/h (50-56 mph) will be maintained. At the opposite direction, on minor downhill roads, top speed increases to 105 Km/h (65 mph). These are speedometer indications, rider only.
Turning on the ignition switch, a considerable time of about 1 minute is required to get a precise fuel level indication. Fuel consumption for the duration of this full throttle test was 3 l/100 Km (94 mpg Imperial). Honda claims an average of 1.9l/100Km (149 mpg Imperial) on normal riding conditions. This variation is very logical indeed.

The dimensions of the scooter are comparatively small, even the width of the handlebars is kept narrow. The weight of the scooter is quite low, 102 kgs (225 lbs) nominal curb, which refers to a smaller engine capacity scooter. The combination of the above, results in a very user friendly scooter, appropriate for weak riders also.

On the road: The suspensions feel soft. A single side swing arm and a single shock are featured. The factory fitted tires are CST, with dimensions 80/90-16 to the front, 90/90-14 at the rear. They consist a moderate choice. In terms of handling on low-average friction factor roads, they should be changed to a smarter compound.

Urban rides are an easy task for the Vision. The light weight and compact dimensions define a minimal scooter.

At the review of the base Vision with the 14” wheels, it was written that “no compromises will be asked to the rider, except from the fact that street imperfections are not absorbed sufficiently by the rear shock”.
Concerning the new 16” wheel, comfort to the rider is obviously improved from the front end, damping more effectively street imperfections.
However because the dimension of the rear wheel remains the same, comfort from the rear end feels even more decreased compared to the improved front. This means that the shock’s average damping quality over street imperfections, is revealed slightly more. Eventually, switching to a 16” front wheel means that comfort is only slightly improved.

Except from the comfort to the rider issue, on downtown rides,  the more congested the streets become, the better the Vision feels adapted to the environment. The absolutely-necessary-to-get-the-job-done-dimensions and weight, are the reasons for this. Vision provides to the rider the calmness to face congested traffic.
The secret weapons that rider will get are first a huge steering lock and second, superb filtering. Just for curiosity, rider will attempt quite some times to check if the Vision can be manoeuvred through narrow traffic paths. Actually, if a standing big man can do it, Vision will probably do that also!
In order to retain uniformity with previews reviews, the height of Vision’s handlebar and mirrors is the same with cars’ and SUVs’ mirrors respectively. This could be the useless information of the week for the reader. Due to their shape and bulk, it will be only the buses that could make things difficult for the Vision under tight filtering. On these, rare occasions, the plastic mirrors of the scooter seem to protrude a little more than the minimal width of the scooter. In other words, an absolute downtown scooter has just been described.

On B-roads, Vision is agile and stable at the same time. Due to the small wheelbase and light weight, agility could be expected to be greater. That would decrease stability though, which is very good indeed. Conclusively it could be said that Vision is between the best of both worlds. Road imperfections are again not absorbed sufficiently by the rear shock. Feedback to the rider is relatively good, which is due to the tyres.

At the fast pace on low friction factor roads, feedback to the rider is closer to the term increasing uncertainty. Rider will not feel confident to charge. Once more this is due to the CST factory fitted tyres which also dislike wet roads and great lean angles. Increasing the dimension of the front wheel, it may be noticed that at the fast pace, Vision’s cornering is slightly slower, increasing somewhat stability though.

At the fast pace on average-high friction factor roads, stability is really good, under high speed cornering also. High speed cornering stands for the standards of the scooter category. No flexibility is taking place. Feedback to the rider is reduced though, a careful reader could tell that this is due to the tyres.

On the highway, if it is necessary to ride there, engine performance will set the riding limits soon. Thus it will not be safe to attempt A-roads rides, due to the low top speed.

Combined brakes are equipped. Applying the 130 mm rear drum brake, a single pot is activated at the front 220 mm three piston calliper disc brake. The front brake is powerful, providing a powerful initial bite and relatively good feedback. The rear brake is linear, providing average stopping power and relatively good feedback. On high friction factor streets, the rear drum brake will not be powerful enough to lock the wheel, rider only. The combination of the two brakes will provide powerful stopping power.

Comments: The storage space under the seat will be adequate for a large full face helmet. This is the reason that the dimension of the rear wheel remained at 14 inches. A kick stand, a centre stand, a hook for shopping bags, an aluminium rack for a maximum 3 Kgs (6.6 lbs) load are provided. The handlebar may be locked on either side, there are two open gloves compartments at the leg shield. It would be better if a locking gloves compartment would be there for the rider.

A step through design is provided, while the floor is rather narrow. There are two indents at the leg shield, rider’s feet will be nicely accommodated there! Two helmets could be secured on the scooter. The colour of the scooter reviewed, was grey metallic, which was nice indeed. Lights are OK, the headlamp is powerful. There are only the basic indications provided on the dash, a modest white illumination is used. The sound of the indicators reminds of a music metronome.
Quality build is good. Vision is manufactured in China, complying with Honda strict specifications of course. Design is conservative, which is something to be expected from this manufacturer at this, scooters, sector. The single sided swing arm provides some contemporary looks though. Pillion pegs could be smarter designed.

Honda describes the Vision as a smart, universal scooter. After the test, it could be said that it’s an economical in terms of tag price and fuel consumption Honda scooter, targeting in city centres around the world. By switching to a 16 inch front wheel at the front, the comfort provided is improved over bumps. It is recommended to those riding on dirt roads, cobbled streets, or simply poor  roads surfaces. It would be a miracle if problems like riding comfort were solved just by changing the front wheel with a bigger one!

- Street imperfections are not absorbed sufficiently by the shock 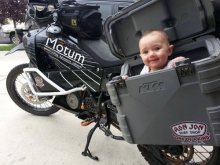