Honda Crosstourer VFR1200X ABS (2012-present) : Big adventure bike in search of a rider of that stature and character, wishing to travel around the world.

The motorcycle tested had 9400 km ( 5800 miles) on the clock. The test was conducted without the extra panniers and top case.

The sound of the engine is a discreet V-4 bass one, aiming to be a nice soundtrack on any journey. According to the selected speed at the gearbox, an engine minimum of 2000 rpm is required, in order to provide surge free acceleration. The torque at the low end spectrum is really satisfying, as an example the engine operation up to 4000 rpm is adequate on town use. This figure with the sixth speed selected corresponds to 120 km/h (74.5 mph).
Power delivery is very linear and punchy throughout the powerband, up to 9500 rpm where the rev limiter intervenes. The power at the top of the spectrum is superb given the character of the motorbike. It will be satisfying to any rider, except those expecting a superbike or a VFR1200F top end performance.

The  traction control which may be deactivated  is very discreet, its one of the very best fitted on a bike.
An indicative average fuel consumption figure is 7.5 l/100 km (37.7 mpg Imperial), which is increased considerably on downtown rides or at the fast pace and it is decreased on normal travelling. Tank range is about 280 km (174 miles). It could be even better for a top-tourer bike.

This is a new record for the big adventure category which is a disadvantage. Its 19 kg (42 lbs) heavier than a BMW Adventure R1200GS. Riders not even close to normal fitness should have at least a decent breakfast! There is no sexist intention at the following statement, female riders are exempted from riding this bike. If there is any female owner, please send an e-mail to the website from the “Contact us” section, revealing the secret of happiness!
Rider is placed in and over the bike, riding position is neutral, providing slight alertness. The torso of the rider is slightly inclined to the front, the handlebar is high, rider’s arms are spread wide on the handlebar. The space for the pillion on the comfortable saddle is large. The dimensions of the motorcycle are considerable.

OE tires are Pirelli Scorpion Trail with dimensions 110/80-19 at the front and 150/70-17 at the rear. They are on-road, touring oriented. They do not favor cornering due to their rounded shape. Although they have been mounted on lighter bikes also, Crosstourer’s increased weight is not an advantage in this case, also. On low friction factor streets or in case of a spirited pace of riding, they should be replaced. The wheels are spoked, the tires are tubeless though.

In town the Crosstourer will be an effective bike as long as traffic is normal and no commuting is required. Riding position is really high, providing superb supervision of the traffic ahead. Due to the edge of the screen at the top, rider’s vision is divided at a point about 15 meters (50 ft) ahead for a 1.75 m (5.75 ft) rider.

On downtown rides the weight of the bike is the first obstacle for the rider to overcome. The bulk of the bike is the second.
Steering lock is excellent, it will be most helpful when maneuvering the bike.
Filtering is good, the height of the handlebar is higher than car mirrors, it’s the same with SUV mirrors though.

Comfort to the rider over street imperfections is generally speaking good, although large bumps will be felt by the rider. Thus she could be an even more comfortable motorcycle.
Due to the engine capacity, the engine gets hot on downtown rides. Eventually rider doesn’t have to visit a fortune teller to comprehend that downtown rides on a scooter, a cub, or a small motorcycle in general will be much easier and cheaper!

On B-roads the stability provided is the key riding feature. The steering geometry is slow, 1595 mm (62.8 in.) wheelbase, 28° caster, 107mm (4.2 in.) trail.
Usually the adventure motorbikes provide considerable agility, despite their bulk. However this is not the case with the Crosstourer, which reveals the on-road genes, the weight and the steering geometry providing just moderate agility.
In other words this is the most neutral riding of the category! Thus rider is encouraged to observe the scenery instead of thinking about the actual process of riding.

At the fast pace, the stability of the bike will be very helpful to the rider, from the other hand the weight of the bike is an obstacle. It may be felt in the form of inertia. Suspensions have to be set stiffer at such a pace. This is mostly due to the weight, suspensions are not actually soft. However they respond nicely to any adjustment.
On low friction factor streets, the OE tires are not really suitable for such a pace. The operation of the engine is not a problem since the power provided is great, the punch at any throttle opening is direct, which is in harmony with the character of the bike.
The robustness of the bike is very helpful also, since despite the limited feedback to the rider, the bike feels planted. She is not tempting though…
Consequently, fast pace riding enthusiasts will need to compromise, despite the power of the engine.

On the highway the stability provided is superb. The sweepers are transformed into straights at a speed that could embarrass several road bikes.
The manufacturer is proved to be right using the VFR1200F as a donor bike since the calmness on the highway is exceptional even on high speed riding. The actual speed of the bike is preserved on the bends also.
The top speed of the bike is 230 km/h (143 mph) indicated figure, the intervention of the limiter is very discreet. Traveling speed is as high as 220 km/h (137 mph), indicated figure. The screen deflects the air turbulence away from the ride’s torso and helmet.
However rider will need a decent motorbike jacket since rider’s arms are buffeted.

The engine operation is an advantage for the Crosstourer since the power is really satisfying and the acceleration is instant. Of course there is no need to downshift in order to overtake.
The screen is adjustable in two increments, although tools will be required to do that. The optional higher screen will be a must to very tall, long distance travelers.

On dirt roads the heavy weight and the dimensions of the bike become a disadvantage since normal stature riders cannot step a confident foot on the ground. Of course on dry, flat paths on leisure rides, the Crosstourer will not ask for compromises.

Twin 310 mm with three piston calipers are equipped at the front, a 276 mm rotor with a two piston caliper is equipped at the rear. The brakes are combined ABS, (C-ABS), whenever a wheel tends to lock, brake pressure is decreased at that end and it is increased at the other end of the bike.
Thus the rear brake provides superb braking power, which is adequate for 80% of the braking cases, that means on everyday rides! In other words rider doesn’t have normally to apply the front brake anymore. Its technology which makes braking procedure go several decades back in time!

Additionally the rear brake provides good initial bite combined with linearity, great stopping power and minor pulsing to the foot lever.
The front brake does not result in considerable front end diving despite the power unleashed, feedback to the rider is relatively good. In emergency braking when the ABS is activated the front wheel may be heard instantly to lock. There is no pulsing on the front brake lever.
Although it sounds that these brakes could be slightly improved, actually they are the best on this bike category up to now.

Model history/versions/optional/reliability/build quality: The Crosstourer was introduced in 2012. It is based on the donor bike VFR 1200 F providing the frame and the engine which is detuned for lower power output (-43 bhp) while the top torque figure is unleashed 2250 rpm lower.
Except from the longer suspension travel, the steering geometry is much slower than that of the VFR 1200F.
A DCT (Dual Clutch Transmission) version is also available featuring the familiar serial/automatic gearbox.

The optional extra brochure is normal for the standards of the category.
Initially a top box is provided which is expandable to 38 L, accommodating a full face helmet then. Additionally the two panniers 35 L at the right, 39 at the left, may accommodate a full face helmet each. These three cases look like aluminum although they are plastic ones.
A centre stand, a higher screen, engine protectors, fog lights, heated grips etc are optional equipment. The height of the saddle is not adjustable while there is no optional lower seat. A 12V plug is also optional.
The build quality and the finish are great on this made in Japan motorbike.

Comments: Τhe lights are powerful. The white backlight on the instrument looks nice and qualitative at night. Following the Kawasaki Versys 650, which was derived from the ER-6, Honda is based on the VFR 800 to produce the Crossrunner and the VFR1200F for the Crosstourer. Kawasaki Versys 1000 also follows the same principle.
However on a bike category where sales are increasing and manufacturers feel the need to provide differentiated proposals in terms of engine layout, Honda chose the most expensive and complicated solution which provides a unique riding character: the big V-4 engine.

Compared to the GS 1200 which is the king of the category since 2004 that she was introduced, the Crosstourer is obviously more on-road oriented, specialized to even faster traveling, although air protection is not that good. In theory the difference in weight between the two bikes is considerable, although because she’s a Honda bike, the feeling of familiarity and relative agility at a walking pace or faster is provided.
In terms of styling, Honda bikes have started to look quite alike. From the pcx, to cbr125-250 and vfr1200f, from nc700x to crossrunner and crosstourer. This is normally good for the smaller members of a family, eg the nc700x - crossrunner. For the owner of the larger Crosstourer though, this doesn’t sound that positive.
As an example its not yet known if Suzuki increased the sales from the uniform styling of the GSXR family.

When Africa Twin was introduced 23 years ago, she was a rather big bike. The Varadero which was introduced 11 years ago, was an even bigger bike. In 2012 the Crosstourer is the biggest and heaviest adventure bike ever built. Since the body type of a normal humans is marginally increased on every new generation, Honda is kindly asked not to enlarge further the size-weight of their adventure bikes, until human beings get proportionally bigger and accomplishing the task to be confident on dirt roads!

The mileage of 9400 km (5800 miles) full of tough journalist riding especially on dirt roads, had affected the condition of the bike. The gearbox felt stressed ( it was not firm enough, missed a gear once, while shifting gears was a noisy procedure, since we are talking about a Honda!). There were few crackling noises from the cowling.
Actually the bike had just returned from a long term test and the riding schedule of the moto-choice.com editor was pressing. Hence it could just be that the bike was not serviced properly before the ride test.

+ Fast highway journeys for the standards of the category

- Styling is not differentiated from the smaller Honda adventure bikes

- Riding is neutral, colorless. The engine operation is unique though. 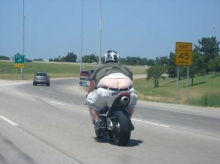