Sym Maxsym 400i (2011-current):  The maxi-scooter grandness and potential, at an affordable  price.

Actually the engine has the daunting task to propel the heavy scooter. Thus acceleration is smooth and linear up to 100 Km/h, it is gradually decreased from that figure upwards. However it’s also the  transmission  which favors top speed instead of powerful acceleration at low speed.   Thus the top indicated speed of 160 Km/h is very satisfying  for the character of the scooter.

Starting the engine an initial check is performed which is pointed by the instrument indicators, underlining the quality  of the scooter. There are numerous indications for the rider on the dash, except from ambient temperature. Despite the great single cylinder engine capacity, there isn’t any noticeable vibration produced. An indicative average fuel consumption is 5 l/100 Km, (56.5 mpg Imperial).

Riding position: The height of the saddle is low, short  riders will step a firm  foot on the ground if they are seated at the very front of the saddle. The width of the saddle is increased towards the rear, thus it will be comfortable for tall riders also. The room provided for the pillion is very spacious.

Rider is placed mostly in the scooter.  Riding position provides alert, the torso of the rider is upright, rider’s hands form a sharp angle: Rider’s arms point downwards, the forearms point upwards, the footrest is somewhat high. If rider is seated towards the rear, taking advantage of the back support, the riding position resembles to that of a …cruiser which is suitable for highway use.

On the road: A Trellis frame type is equipped. Suspensions feel relatively soft. The spring preload at the rear is the unique suspension adjustment for the rider, in  five increments.

OE tyres are Maxxis with dimensions 120/70-15 at the front and 160/60-14 at the rear. They are considered to be a moderate choice, they should be replaced  in case of low-average friction factor roads.

In town the Maxsym will be an efficient  scooter to ride, on normal traffic. At the end of the day though the increased weight of the scooter feels like inertia. It will become a disadvantage in case of solely urban rides.

Agility feels reduced compared to the 300 c.c. scooters, which on normal rides will not be a problem for the rider. The sense of stability provided increases riding confidence.

Downtown on congested traffic, the weight and the bulk of the scooter will ask for a compromise.  Its not the easiest scooter around, which is something to be expected from the maxi-scooter category.

Steering lock is  also not helpful maneuvering the scooter around cars. At the process of filtering the height of the handlebar is the same with car mirrors, the height of the scooter’s mirrors is slightly higher than SUV mirrors.   On conditions like these, the 300 c.c. scooters are more agile, Maxsym’s rider will envy the  150 c.c. scooter riders!

Comfort over urban street imperfections is quite good given the wheels size, it reminds of an average 16 inch wheeled scooter.

Consequently on traffic jams, the Maxsym will impose the normal at the maxi-scooter restrictions to the rider, which are equivalent to those of a normal 600 c.c. bike.

On B-roads on normal pace, the Maxsym is a stable scooter, providing confidence to the rider. Again the smaller 300 c.c. scooters are more agile, e.g. comparing the Maxsym with  the Citycom 300. Comfort to the rider is very good.

Riding harmony is restored at a nimble pace, the Maxsym soon becomes an agile scooter. The weight and the bulk  are not a disadvantage then, rider feels a mixture of agility, robustness and stability. Feedback to the rider at such a pace is moderate, due to the OE tyres.

On the highway air protection is very good, it will not be a problem for the rider. Stability is really good also. The optimal travelling speed is 140 Km/h. The screen may be adjusted in two increments, although the use of tools is required.

This average braking performance is due to the tyres fitted. The rear brake is powerful, its  actually diving the front and rear of the scooter, since partially  the front brake is also activated. On low friction factor streets the lack of ABS is a disadvantage. In case that  the specific  model name was not Sym Maxsym, underlining that it’s the manufacturer’s flagship, that would not be considered  a drawback.

Model history/reliability/quality build: It was introduced in 2011. No specific reliability  issues reported.  Decent finish and assembly fit, no buzzing parts. In other words, quality build is excellent.

Comments: The rest floor is not flat. The storage space under the seat may accommodate a common full face helmet, at either a vertical or parallel to the scooter orientation and a bicycle helmet or a shopping bag.  Alternatively two small sized full face helmets could be accommodated.  The seat is supported with two tiny shock absorbers, an internal light is also provided.

A 12 V socket and a USB one are also standard equipment at the left leg shield gloves compartment.  These compartments are conical shaped both at the leg shield and under the handlebar.  The instruments are beautiful, qualitative.

Two rows  of LED daytime running lights, are lit together with the scooter’s front lights. The rear lights are LED, forming an L pattern when lit. The large and long silencer declares the engine capacity. The handbrake is activated by the lever at the right leg shield compartment, actuating front and rear brakes. Placing the scooter on the centre stand is not that difficult as it is expected, it reminds of a 300 c.c. scooter then.

Consequently the Maxsym balances between open road stability and urban usability. The would be maxi – scooter  buyer  should find a detailed excuse to address to a larger engine capacity than Maxsym’s 400 c.c.. The only compromises will be asked downtown, which is expected by this scooter category. The magnificence felt by the quality build and the scooter’s bulk, could not end up without compromises… 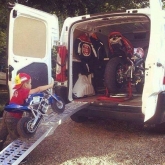