Engine operation feels refined, there are no vibrations to the rider. Acceleration is smooth, there is a minor yet noticeable power step at 40 km/h. Acceleration is linear from that figure upwards, the boost provided is constant, really adequate to do the job, up to the top speed of nearly 180 km/h, indicated figure. Building up speed, even from 140 km/h upwards, is really impressing.

The fuel cap is located at the top of the central tunnel, on the floor. Therefore rider doesn’t need to disembark in order to refuel the scooter somewhere on …Route 66. Fellow Harley riders have to remain calm reading this attitude. There are few more bikes out there, really capable of cruising nicely at 100-140 km/h. Indicative fuel consumption, 5.5 litres/100 km (51 mpg Imperial).

Riding position: The saddle height is low, 755 mm. The small width of the saddle will make it easy for short riders to step a confident foot on the road, if they are seated at the very front of the saddle. Due to the excessive weight this is a must. Tall riders will feel right at home.
The dimensions of the scooter are increased. The length is large, the width is relatively large at the leg shield and the height is normal.

Silver Wing is a heavy scooter, 250 Kg nominal curb, for the ABS version. Just mounting the scooter on the centre stand, rider gets a clue about weight. Additionally if the scooter is inclined stationary at either side, it becomes difficult to retain it upright. Female riders must think it thoroughly, except if they are tall, body building athletes. Professionals, would be better.

Rider is placed mostly in the scooter, riding position is neutral, rider’s hands are spread wide on the handlebar. The central tunnel on the floor will be an obstacle for short riders, lifting a foot over the scooter.

On the road: The 41 mm fork feels soft, the stiffness of the two shocks at the rear feels average. The spring preload at the rear is adjustable in five increments.
OE tyres are Bridgestone Hoop, with dimensions 120/80-14 at the front and 150/70-13 at the rear. They are a superb choice for the specific scooter, providing also a powerful frame to support the weight.

On town rides, Silver Wing will be satisfying at the suburbs and on avenues. Compromises will be raised as traffic begins to increase, or in case of short commuting.
The bulk and weight of the scooter cannot be hidden, the latter is felt in the form of inertia when maneuvering the scooter on low speed. The central tunnel also reduces everyday commuting usability. Tall riders will lift a foot over the saddle, short riders over the tunnel.

Naturally the engine performance will easily propel the scooter ahead of traffic at traffic lights. At the process of filtering the height of the handlebar and mirrors is the same with cars and SUVs mirrors respectively. That will not be a problem for the rider.
Steering lock is good, it will be adequate for the rider, maneuvering the scooter.

Comfort to the rider is good, much better than the expected from the small wheels dimensions. Large imperfections are absorbed adequately also. This is indicative for the smart design and quality build of the scooter.
Conclusively the Silver Wing is still a scooter in town, not an easy one though!

On B-roads on low-moderate speed, inertia is still evident. Agility is not equivalent to that of a scooter, which is due to the weight, the slow steering geometry consisting of the 1600 mm long wheel base and 28,5° caster. At a normal pace however Silver Wing becomes agile, like a …scooter should be.

At a faster pace on sweepers weave builds up, which is something to be expected by a scooter. Charging the SW-T then produces large oscillations, neither the scooter nor the rider feel comfortable with that.

On the highway the engine is willing for long journeys. Air resistance will be felt above 150 Km/h at the helmet of the rider.

Thus travelling speed is limited between 120-150 Km/h, the Silver Wing feels capable to maintain that speed forever on any highway. Its really comfortable and effective on these conditions. On winter use the optional heated grips will be helpful.

Brakes are user friendly, providing average feedback, matching with the character of the scooter. On low friction factor streets, rider will feel the front end at the limit of sliding, which does not get worrying though.

Model history/reliability/quality build: After a decade of the ex generation of Silver Wings without any noticeable changes, a completely new model was introduced in 2011. The new SW-T 600 was based on the body of SW-T 400, where a 600 c.c. engine was installed. There are no specific issues concerning reliability. Quality build is superb.

Comments: A full face and a jet helmet, or two jet helmets, or a backpack may be accommodated at the storage space under the seat, leaving additional free space. At the very front of the storage space there are tools and a shock, supporting the opening saddle.

At the leg shield under the handlebar there are three very deep gloves compartments, which will provide plenty of space, due to their depth mainly. The two speedometer and rpm instrument needles are lit bright red, reminding the red Honda logo.
Fuel consumption indications are also provided. An immobiliser and an ABS for most of the countries sold, are standard equipment for the SW-T. Heated grips, a 40 litres top box and other optional factory equipment may also be installed.

+ Quality build + Space-comfort + Highway use
- Weight - Compromises asked, equivalent to those of a motorcycle - Price 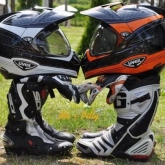