The scooter accelerates very quickly up to 20 km/h, fast up to 40 km/h, slowly at 50 km/h, very slowly up to 60 km/h which is the top speed, indicated figure.
This performance defines a vivid scooter aiming solely within the boundaries of a specific district. However this performance is poor when riding on avenues or the open road.

Riding position: The height of the saddle is very low, suitable for very short riders. The scooter is really compact, tall riders may find their knees being very close to the handlebar.

The weight of the DD is really small, it equals with 80 Kgs of feathers (!), claimed figure, dry.
Rider is placed in and over the scooter, riding position is neutral.

On the road: Suspensions provide a softy feeling. A single shock absorber and single side swing arm are equipped at the rear.
The tyres fitted were Michelin S83, with dimensions 3.00-10. They are a very good choice for the specific scooter.

Around the …neighborhood, the DD will be a very sufficient scooter. The same applies on traffic congested streets. The diminished weight and the compact dimensions will be very helpful to the rider on commuting.

Agility is superb, it will help the rider further on traffic jams. Maneuvering around cars will be a piece of cake due to the extreme turning radius. In case that the DD gets stuck into traffic, rider could make relieving thoughts: Things would be rather worse on anything else!
Even filtering is splendid. Usually, the handlebar is lower compared with car mirrors, the scooter’s mirrors are higher than car mirrors.

In urban areas – suburbs, agility is again the most prominent riding feature. Confidence to the rider is relatively good. Damping of road imperfections is just average, rider will get a clear view of any pothole.
The engine is just adequate for normal urban streets, rider will feel weak on avenues, the scooter will be slower than anything else on the road.

A 160 mm disc brake is equipped at the front, a drum brake at the rear. The front brake is relatively powerful, the rear is rather weak. The front brake will require caution in case of emergency braking on slippery streets. Feedback to the rider is average.

Comments: A jet helmet may be accommodated at the storage compartment under the seat. Carrying of larger objects is easy due to the flat floor. Mounting a top case at the rack provided, the total storage space provided becomes disproportionately large compared to the scooter’s bulk.
Except from the electric start, a kick start, a centre and kick stand are also standard equipment. The fuel cap is located at the leg shield, right next to the open gloves compartment.

A highly specified scooter has been described. The more integrated it feels on traffic congested streets or around the neighborhood, the less adequate it becomes on the open road, asking for major compromises. DD 50 is called Super Pure 50 in Israel and as Jolie 50 in Australia.

+ Price + Downtown use
- Open road use - Comfort over road imperfections 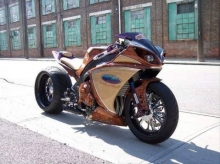