Engine: The V4 90° liquid cooled 782 c.c. engine delivers 100 bhp/10000 rpm and 8.08 Kgm/ 8750 rpm torque, claimed values.
Actually at least 2500-3000 rpm will be needed according to the selected speed to get smooth accelerarion without surging.
Torque provided at  low revs is very satisfying, town rides may be easily accomplished using the lowest power band, up to 4000 rpm. There is always available boost for the rider from 3000 rpm upwards. Indicatively the speed of 100 Km/h corresponds to 4200 rpm.

Observant riders will notice that at 6500 rpm, engine sound is altered and a power boost can be seen, because of the VTEC activation. Due to this system engine operation is literally an 8 valves one at the lower rpm spectrum, while it becomes 16 valves operation above the 6500 rpm threshold. At 8000 rpm, a second power step may be observed. Above 11000 rpm engine revs are increased slower, up to 12500 rpm, where the rev limiter intervenes.
A chain final drive is equipped. Engine power provided is adequate for an average rider to fulfill any sporty mood, combined with superb user-friendly, everyday riding.
The engine sound and performance above 6500 rpm are the key elements which rider will perceive as edge of character from the Crossrunner.

Riding position: The saddle height is increased, 816 mm, the width of the seat is also large. Riders higher than average will be fully satisfied. However because the balance of the bike is good, average height riders will also feel comfortable on town rides.

The dimensions of the bike are average for the standards of the category. The weight feels increased, 240 Kgs curb. It’s the familiar Honda-user-friendly characteristic which compensates riding, otherwise the weight of the bike would become an issue in case of commuting.
Rider is placed mostly in, rather than over the bike. Riding position is neutral, riders arms are stretched forward.
Pillion is seated on a level and low seat, which makes ascending and descending of the motorbike an easier procedure.

On the road: An aluminium alloy twin-spar frame is used, which is a street bike-derived chassis.
Suspension feels relatively firm. At the front a 43mm cartridge-type fork is used, while at the rear a cast aluminium Pro-Arm swingarm, an adjustable shock and a Pro-Link linkage system. The spring preload is adjusted at the fork, the spring preload and the rebound are adjusted at the shock.

Factory fitted tyres are Pirelli Scorpion Trial with dimensions 120/70-17 at the front and 180/55-17 at the rear. They are considered to be a touring option, handling is not benefited or worsened because of these tyres. From one point of view they match exactly with the character of the bike. It will be only at the fast pace and especially on slippery roads that they had better be replaced with a softer compound.

On town rides the Crossrunner will be an overwhelmingly …neutral bike to ride. Rider will be calm due to this really good urban bike, usability is increased, user friendliness is splendid.
From the other hand, the exaggerated neutral riding tends to be indifferent. Rider could almost forget that this is a brand new 800 c.c. bike, traffic observation will probably absorb him, instead of active riding.
Due to the 800 c.c. displacement, engine gets hot on town traffic, easily.

At the process of filtering the height of the handlebar is usually greater than that of cars’ mirrors. The height of the bike’s mirrors is the same with that of SUVs’ mirrors. Rider will not face any problems.
Steering lock is good, really adequate for town use. Urban street imperfections are absorbed well from the fork, slightly worse from the shock, depending on the adjustment as it will be described later on.

On B-roads the Crossrunner inspires confidence to the rider. Riding neutrality is again the key feature. Agility is a secondary element, which doesn’t mean that the bike is not agile. One more feature amplifying riding confidence is the robustness of the bike.

At the fast pace, feedback to the rider is good. Rider will preserve a high riding pace, exceeding nimble pace’s boundaries. Riding confidence is not decreased easily, even on low friction factor roads, where tyres fitted are not the most suitable for such a pace. Rider will feel the rear to begin sliding at the exit, opening the throttle and that’s the end of the feedback’s story. On conditions like these at such a pace, the 6500 rpm threshold requires a very slight caution.
Additionally at the edge, in case of bumps at the length of the bend, the bike gets affected. Stiffening the shock, this issue is rectified to a great extent, although comfort over normal street imperfections is deteriorated then.

Conclusively the handling of the bike will surpass the potential of the mythic average rider. A fast rider who is not seeking for any track days bike will resolve any remaining issues by changing the tyres with a soft compound.

On the highway, the riding position combined with the short screen will not protect a tall rider from air resistance at a speed of 140 Km/h.
An average travelling speed will be up to 150 Km/h. Rider will not be able to maintain 170 Km/h, with the standard screen fitted, a major effort will be required. The activation of the VTEC at 6500 rpm, corresponds to 155 Km/h on the highway.
Possibly fuel consumption could be lower on a journey with a longer gearing say 165 Km/h, which is a very ambitious travelling speed for the Crossrunner.

On dirt roads, the tyres fitted which are mostly on-road oriented, do not provide good traction. The suspension and ground clearance yell that they belong to a street bike. The Crossrunner preserves a playful character on dirt roads, although that’s all that rider gets. Slippery, grooved or rocky dirt roads are to be avoided.
Conclusively dirt roads riding is equivalent to that of a very good, at this specific aspect street bike, although these bikes are not normally evaluated by these criteria!

Twin 296mm floating discs are arrested by three-piston calipers at the front, whilst the rear 256mm disc brake adopts a twin-piston caliper.
Brakes are combined, provided with ABS,(C-ABS). They are powerful, providing strong initial bite, good feedback. There is no actual meaning to this, however the front brake just before ABS is activated will be locking the wheel for a fraction of time, say a tenth of a second.
The combination of the front and rear brakes provides really powerful and effective braking. ABS is not deactivated although this also matches the character of this Honda.

History/reliability/quality build: Crossrunner is derived from the VFR 800 VTEC (2001-current), the last improvement of which goes back to 2006.
Additionally that Honda model was the replacement of VFR 800i. Many settled riders considered the VFR the best street bike, ever, at that era. The greatest disadvantage of that VFR was the increased fuel consumption.

Crossrunner is designed directly, using almost the same parts with the VFR 800 VTEC, which is a factory attempt to complete the line up, on a low development cost basis.
After a universal economic crisis which many countries still cannot overcome, there is nothing wrong with such a proposal.
Eventually, although the Crossrunner is a brand new model, it can be safely claimed that it’s a very reliable bike. The design and the styling introduced are the only actual new elements of this bike.

Comments: The key lock lies deep at the front. Some cabling and a connector can be clearly seen just behind the headlamp, which is something not to be expected by Honda.

Average and instant fuel consumption indications are provided on the dash. Indicatively the minimum figure shown was 3 l/100Km and the maximum 40 l/100Km. The instrument and the orange color light look conservative.

As it was written at the “News” section commenting at the press kit about a year ago, the Crossrunner is the alter ego of the Transalp, a more on-road oriented bike, without any touring improvement though. The increased user friendly approach of the bike will be helpful to an inexperienced rider, although an uninspiring- yet usable bike will be there for the experienced rider.

- Another one cold-blooded Honda? 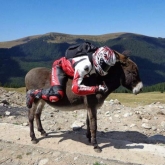