Engine: The 999 c.c. engine produces 175.6 bhp/12000 rpm and 11.3Kgm/8500 rpm torque, claimed values.
Actually, the first impression that the rider gets is the engine torque. Although the idle speed is 1200 rpm, thrust may be obtained from as low as 1400 rpm. This means sixth gear at 36 km/h! As an indication, the lowest power band of engine operation up to 3500 rpm, is sufficient for daily urban commuting. Throttle response is immediate. The slipper clutch is light which is very helpful in town rides.

Engine performance is very linear. The middle area of the power band is also very punchy, sporty riding will require at least 6000 rpm. It’s the instant thrust in the lower-middle area of engine operation that makes the power delivered at the top of the power band, just predictable. The top end power can’t be described as phenomenal, it’s truly punchy though, fully usable.
The sound of the engine is altered between 4 and 5000 rpm. Revving up the engine, especially at 4000 rpm, the muffler serves also as a resonator. Sounds kind of loud in that area.
During town rides the engine gets hot. With the help of the cooling fan, engine temperature is kept constant at 101 ° C.

Riding position: The saddle height is moderate, just a touch to the tall side. Most riders will step a confident foot on the ground.
The dimensions of the bike are relatively small, which is obvious just by looking to the bike. The bike feels relatively heavy, 199 Kgs Kerb nominal, which makes it 210 Kgs full. Centre of gravity feels in the middle of the bike or marginally higher.
Rider is placed mostly over the bike, riding position is sporty, providing alertness to the rider. Its not as radical as a racing riding position.

On the road: The firmness of the suspension is moderate. Due to the evaluation needs, suspension was set to the hard side. The tyres fitted were Metzeler Sportec M5 Interact, with dimensions 120/70-17 for the front and 190/50-17 for the rear. They consist a fair choice for this bike, an average choice to charge.

Probably the CBR is the easiest superbike to perform city rides. Its an exceptional user friendly bike, which combined with the compact dimensions, make the CBR an almost uncompromised motorcycle for urban use.
The prominent Honda character is suitable with practicality. In the case that rider is not familiar with it, he will get a pleasant surprise. That doesn’t mean that added a top case it’s a decent couriers bike, promise for better jokes from now on!
The combined ABS brakes provide very safe urban rides. Street imperfections are absorbed quite well, despite the very firm adjusted suspension.
In the process of filtering the height of the clip ons is lower than car mirrors. The mirrors of the bike are at the same height with car mirrors though. That results in a relatively good filtering.
Steering lock is moderate. Thus, maneuvering the CBR around cars, it will require some planning in order to achieve an effective one-step manouevering instead of a two-steps procedure. It’s the point that the hardest compromise of a friendly superbike has just been described.

On B-roads a mixture between agility and great stability may describe the rides on the CBR. The weight of the bike feels diminished, rider feels exceptionally confident. CBR is a bike that will allow leisure rides or fast pace riding, it depends on the rider’s mood.

At the fast pace, every rider will feel very confident to charge. On low-average friction factor roads, the rear wheel provides the feeling that it will tend to slide, at any instant, during cornering.
Feedback to the rider is excellent, rider feels that he is directly connected with the rear wheel. Any slide to the entry, traction available, sliding to the exit can be felt in a very detailed way. Power slides are really easy and safe. Of course there is not any electronic sliding control system.

The front end is more neutral. At a very fast pace it will provide confidence to the rider, although there is nothing more to get. It will need more load to provide better feedback, as riding position feels rather comfort biased for such a pace.
The brakes are faultless, they will provide the stopping power asked allowing precision braking deep into the bend. The CBR doesn’t have the tendency to get upright under braking mid corner.
At an almost racing pace, inertia may be felt when changing direction, despite the short wheelbase. This is due to weight.

On the highway the wind protection is good enough, allowing high speed travel. This is an area clearly improved compared to models before 2008, that’s when the new model was introduced. The comfort provided to the rider is very good for the category standards.

The radial brakes are combined, provided with ABS, rubber brake hoses are used. At the front two 320 mm discs - four-piston Tocico calipers are fitted. At the rear a 220 mm disc with single piston Nissin caliper is used.
It will be hard for the rider to point out any flaw in their operation. The ABS operation cannot be felt on any brake lever. Feedback to the rider is superb. Normally applying solely the front brake, the rear is also engaged by the combined brakes system. That results in less front end diving under braking, increasing the bike’s stability also.
The only disadvantage of the sophisticated braking system is the weight, which is 10 Kg, that affects the handling of the bike at the limit.

Reliability: No reliability problems have been reported. Quality build is superb.

Comments: The extra weight can be felt by an owner of the 2008 model. It is generally assumed that motorcycles get lighter, more powerful and faster every few years, because of marketing and evolution laws.
The C-ABS model provides a heavier feeling bike than its predecessor, when being maneuvered. Difference in riding the ABS model will be noticed only at a racing pace, as change of direction is slightly more reluctant compared to the previous model. On the other hand, safety provided is great, the ABS operation is very discreet and exemplary. The only features missing from this bike is a traction control and several power modes concerning the engine performance.

Honda decided to abandon the perception of the cold-blooded yet effective model of 2004-2007. A new model was presented in 2008, the 2009 onwards model is an evolution of that. It’s a more involving bike, much faster also. The protruding removable plate base provides a detailed description of these changes. 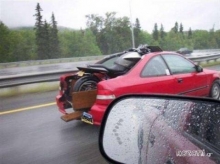