The scooter under test was new. An improvement to the performance described should be expected.

Top speed is  controlled at 156 km / h. Taken from indicated figures. There is no rpm meter on the dash. The engine produces a slight vibration at idle. Indicative average fuel consumption, 4.3   l/100km (65.7 mpg Imperial).

Riding position: The seat height is average at 785 mm, the width of the seat is increased. The result of these two is that short riders will step a relatively confident foot on the ground.

Rider is placed mainly in the scooter, riding position is almost neutral. The word almost is used as the rider is placed slightly forward. Thus rider is kept in alert. This is due to rider's area edge on the saddle, which creates a step, acting as a mandatory stop for large sized riders.

For average height riders this is welcomed. The level floor at the feet of the rider is a little narrow, it is possible that on the wet, rider has to keep his legs at the centre of the leg shield to keep them clean from road dirt.

On the road: Suspension feels firm, its firmer than that of the previous model. The factory fitted tyres are Metzelers Feel Free, with dimensions 110/70-16 front, and 130/70-16 rear. These tyres are a good choice. On average – low friction factor roads, they are considered to be relatively hard.

Urban rides on the SH will be easy. Even on traffic congested streets, there will not be any problem for the rider. It is considered to be one of the most friendly and agile scooters in its class.
The changes conducted in suspension and frame, provide a stiffer feeling of the scooter. On high friction factor level streets, this will enhance the riding confidence.
However on streets featuring imperfections, comfort is decreased compared to the previous model. Potholes or street bumps are absorbed relatively well, the SH lost a substantial advantage compared to the competition at this point. Rider may notice every road imperfection now, however this doesn’t get bothering.

In the process of filtering the handlebar is sometimes at the same height with car mirrors. Usually its higher than those. The height of the scooter’s mirrors is the same with the SUV’s mirrors. Actually filtering is trouble-free due to the moderate width, the height of the handlebar or mirrors will not play any role.
Steering lock is top class, downtown agility is greatly enhanced because of it.

On B-roads the agility of the scooter is superb. The firm suspension is combined with the rigid frame, providing a playful character. Honda manages to keep a delicate balance between neutral and sporty character on country roads. Road imperfections are noticed by the rider, this is not disturbing though.

At the fast pace on B-roads, the nature of the scooter feels complete. The SH provides a sweet sportiness, rider will be overwhelmed. Feedback and confidence to the rider are superb for the category standards, a determined bike is there. At such a pace its better than the previous model, although there are quite a few 300 c.c. scooters providing a similar character.

On the highway the SH is transformed to a limousine. Road imperfections disappear as if by magic, providing high-quality rides.
The wind protection is good, even at top speed. For a normal height rider the air pressure deflected from the screen is exercised in the middle of the rider’s helmet. Some wobble may be noticed close to the top speed.

The scooter is provided with C-ABS disc brakes front and rear. There is a three piston caliper at the front, a single piston caliper at the rear, both Nissin. Applying the rear brake a single piston of the front is actuated.
Τhey are powerful , providing average feedback to the rider, if anybody cares, because of the ABS. The operation of the ABS is felt on the brakes levers, when actuated. Additionally the ABS operation feels like intervening literally the very last moment, tyres are preserved between slide and handling.

If someone wonders if this is what an ABS is supposed to do, other ABS systems seem to intervene earlier.
Of course, many tests were conducted on various friction factor roads, there was not any problem. Braking is superb, except from the feedback, which again is useless, thanks to the ABS.

Comments: A passing signal, a very distinctive indicators beeper, side stand are provided. There is a small and deep glove box high at the top left of the leg shield, providing a 12 V socket. This is the same with the previous model.

The storage space under the seat, maybe is adequate for a bicycle helmet. This is indicative of the size of the space, the bike helmet is not related to riding a scooter!
The beautiful, high quality top case will accommodate a set of rainsuit and a full face helmet as an example. Its not big enough to accommodate 2 full face helmets, it will be adequate for two shopping bags, easily.

The character of the scooter has shifted compared to the previous model. This addressed in everyday riding. Providing a mixture of Japanese and Italian character, it worked like a magic carpet, really suitable for many people.
After the changes in frame and suspension, the character of the scooter is genuinely… Italian. Hence the title of the article. Sporty riding forms a smile to the riders face, however comfort is decreased on poor street surface.

Similarly, the design remains conservative, which is not consistent with either the extensive changes made, nor criticisms targeted in this area at the previous model. 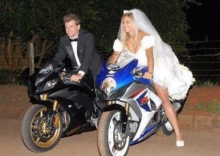